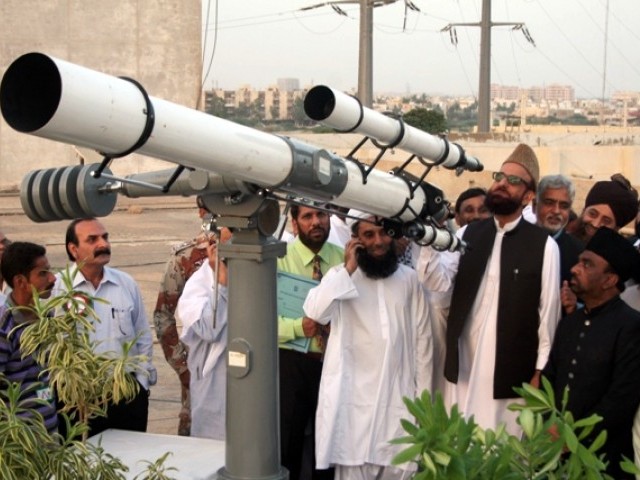 When it comes to Eid, Peshawar has a lunar cycle of its own.

Khyber-Pakhtunkhwa has been largely independent vis-à-vis observing Eid for the past several years, but the defiance was solidified on Saturday when not only the usually-cantankerous unofficial Masjid Qasim Ali Khan but the official zonal moon-sighting committee also declared that the Shawwal moon had been sighted across the province.

However, by the time that was announced, the central moon-sighting committee had already declared that the Shawwal crescent had not been sighted anywhere in the country, and Eid would therefore be observed across Pakistan on Monday, August 20.

The controversy was further fuelled when the provincial government sided with the zonal committee and declared that Eid would be observed officially across Khyber-Pakhtunkhwa on Sunday, August 19.

Meanwhile, people in North Waziristan and parts of Khyber-Pakhtunkhwa have already celebrated Eid on Saturday, August 18, following an announcement of sighting of the new moon by a local, self-styled moon-sighting committee in Miramshah.

The controversy over the crescent, however, deepened on Saturday as the official zonal committee in Peshawar, a subsidiary of the central moon-sighting committee, declared that they received 18 crescent-sighting testimonies from across the province.

The central committee, however, had already declared by then that no testimonies had been received from across the country.

The zonal committee protested against the centre’s decision, and called upon the provincial government to declare Eid across Khyber-Pakhtunkhwa on Sunday (today.)

Meanwhile, the unofficial committee at Masjid Qasim Ali Khan also said that they had received 16 crescent-sighting testimonies from different parts of the province, including Dera Ismail Khan, Bannu, Swabi and Mardan, and declared they would celebrate Eid on Sunday.

With the clash already reported, all eyes were on the Khyber-Pakhtunkhwa government.

On behalf of the Khyber-Pakhtunkhwa government, Senior Minister Bashir Ahmad Bilour came to the fore and made an official announcement about the sighting of the Shawwal moon.

Speaking at the Masjid Qasim Ali Khan, he said that Eidul Fitr will be officially celebrated across the province on Sunday.

He added that the zonal committee in Peshawar also received 18 moon-sighting testimonies but the central committee refused to consider them.

“We wanted the whole nation to celebrate Eidul Fitr together – but unfortunately that did not happen.”

Mufti Munibur Rehman, Chairman central moon-sighting committee, dismissed the decision of the zonal committee and said he would like to say to them what they would say to Miranshah’s decision of celebrating Eid on Saturday.

The nation would decide on Sunday whose decision on moon-sighting it accepted, he added.

And while three consecutive new moons may not be theoretically possible in a particular region, Pakistanis will religiously observe their own Eidul Fitr, on three separate days.

Eid was celebrated on Saturday across the North Waziristan tribal agency and parts of Khyber-Pakhtunkhwa, including Shabqadar tehsil of Charsadda.

The decision to observe the festival was taken by a self-styled local moon-sighting committee that claimed it had received seven testimonies from Mir Ali, a sub-division of North Waziristan.

Barelvi clerics in Charsadda also announced late Friday night that they had received testimonies from their colleagues in various parts of K-P, and called for observing Eid on Saturday,

Meanwhile, the Charsadda police, on the directives of the district government, arrested the cleric who made the announcement.

The arrested cleric has been identified as Lal Rehman.

According to a police official of Shabqadar Police Station, Rehman has been arrested from his house in Matta Mughal Khel, Shabqadar, and has been put behind bars in the police station.