The scienc­e has been writte­n about extens­ively for at least a decade.
By Mithal Khuhro / Sameer Mandhro
Published: August 19, 2012
Tweet Email 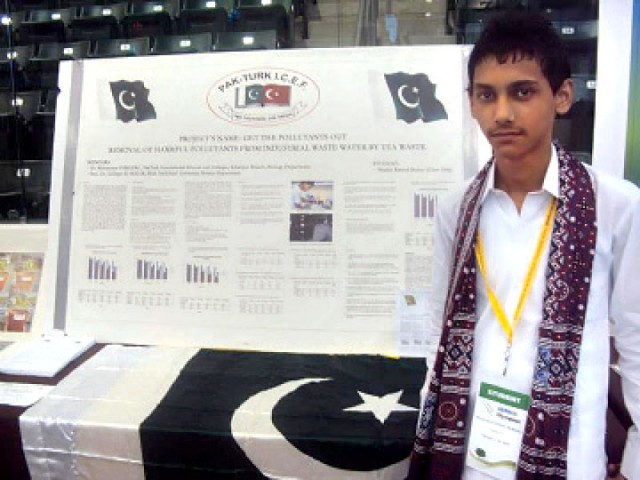 A hot sweet cup of tea will solve most problems. But it appears that more and more research is proving that tea can help clean water for human consumption.

For one, Shadab Rasool Buriro, a tenth grade student of the Pak-Turk International School in Khairpur, won silver at the GENIUS (Global Environmental Issues-US) Olympiad, for his project: The removal of harmful pollutants from industrial waste water by the use of tea waste. He defended it in front of seven impartial judges at the international competition that was jointly organised by the State University of New York (SUNY) at Oswego and the Terra Science and Education Foundation. Buriro collected used tea, washed it with boiled water till it had lost all its colour, and then dried it. He then made mixtures of substances commonly found in industrial waste, like cadmium, lead, nickel and phenol, and then mixed them with the dried tea. “After waiting for 60 minutes, I analysed different filtrates obtained by a spectrophotometer and recorded the concentration of each pollutant separately,” he told The Express Tribune. “The results proved that used tea waste can remove [pollutants].”

Buriro’s project was initially sent to the Pak-Turk School’s head office in Islamabad, from where it was forwarded to the US. “I read about the kinds of pollutants that affect our agriculture sector, and decided to work on this particular project,” he said. “I was not expecting to get any position as other students were so confident and well-prepared.”

The Turkish government has recognised Buriro’s achievement and sponsored him for a 15-day visit to Turkey, where he was officially introduced as the boy who competed against students from 50 countries.

MPA Nusrat Sehar Abbasi of the Pakistan Muslim League-Functional told Sindh Express at an event to honour Buriro that she would bring it up at the next session and recommend his achievement be acknowledged. Buriro is not the only person to have used this particular method to clean water. In the Journal of International Environmental Application & Science published a paper on how used tea waste helped remove phenol from industrial waste water in Kosovo. In 2010, a group of researchers in South Africa developed a high-tech tea bag filter filled with active carbon molecules that can be fitted on top of a bottle to purify water as it is poured on a cup. Closer to home, chemical engineers at the Mehran University of Engineering and technology, Jamshoro published a paper last year in the Sindh University Research Journal on how they used tea waste to remove arsenic from aqueous solutions. They referenced similar work done by four researchers who published their findings in the Iranian Journal of Environmental Health Science & Engineering in 2007.

A cursory search with the terms ‘adsorption of heavy metals with tea waste’ on Google Scholar revealed 10 hits per page.