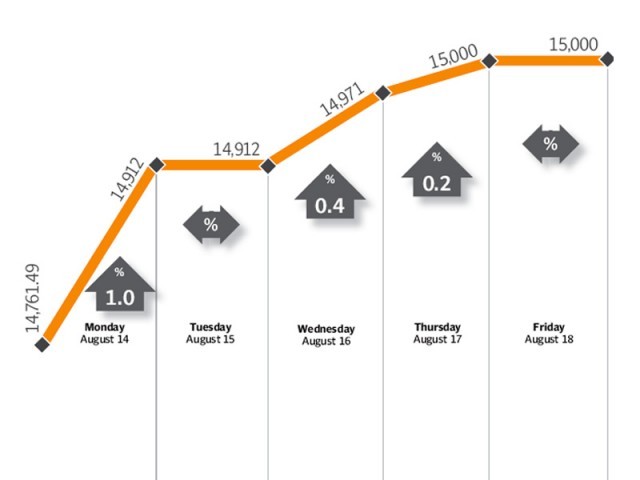 The stock market put up a robust show during the traditionally dull pre-Eid week as the benchmark KSE-100 index managed to cross the 15,000 barrier following the surprise announcement by the State Bank of Pakistan to cut the discount rate by 150 basis points in its monetary policy unveiled on August 10.

Following the single-digit inflation numbers for the last two months, it had been widely expected that a discount rate cut was on the cards, but it was the magnitude of the rate cut, ie 150 basis points, that took investors by surprise and provided a platform for the week’s gains. The index gained 1% on Monday.

Following the rate cut, foreigners also actively participated in the market and a net inflow of $35.9 million was recorded during the week. However, $30 million of these inflows was in a one-off transaction.

The corporate earnings season also played a major role in the market’s fortunes as several heavyweights announced their earnings during the week. They were led by Pakistan Petroleum Limited, which posted earnings growth of 30% for the year, with earnings per share of Rs31.13.

PPL performed exceptionally well during the week, outperforming the market by 5.4%. Similarly, Lucky Cement also revealed earnings growth of 71% over the previous year, with EPS of Rs20.97. However, its limited cash payout was a dampener and its stock performance was not as strong.

Allied Bank Limited’s earnings were also strong with earnings growth of 32% and EPS of Rs3.50. The only disappointment of the week was Engro Corporation which posted earnings below expectation with a loss per share of Rs0.67 for the first half of 2012.

The discount rate cut and the positive earnings figures provided a significant boost to both volumes and values. Average daily volumes stood at 155 million shares, up by 157% over the previous week. Similarly, average daily values also doubled and stood at Rs4.65 billion.

The market capitalisation rose 1.6% to Rs3.82 trillion by the end of the week.

Soneri Bank Limited is engaged in banking services and operates through its 154 branches across the country. The bank operates in four segments; corporate banking, trading and sales, retail banking and commercial banking.

The company’s principal activity is marketing petroleum and petrochemical products. The company’s stock price fell after it reported loss of Rs2 billion in the first six months of 2012 against profit of Rs4.4 billion in the corresponding period last year.

Karachi Electric Supply Company (KESC) is engaged in generation, transmission and distribution of electricity to industrial, commercial, agricultural and residential consumers of the country’s financial capital. Owned by UAE-based Abraaj Capital, KESC is the only privatized electricity distribution company in the country.

The company is engaged in the manufacture and sale of detergents, personal care and other related products. Star products include Azadi, Max Bar, Brite Maximum Power, Express Power and Bonus.

Media Times Limited is engaged in printing and publishing English and Urdu newspapers and also production and broadcasting of television programmes.

Oil production likely to increase in 2013