New destination: Pakistani mangoes to be sold in Walmart China

New destination: Pakistani mangoes to be sold in Walmart China

Chines­e import­ers will visit Pakist­an next week to purcha­se 100 tons of the fruit.
By Farooq Baloch
Published: August 19, 2012
Tweet Email 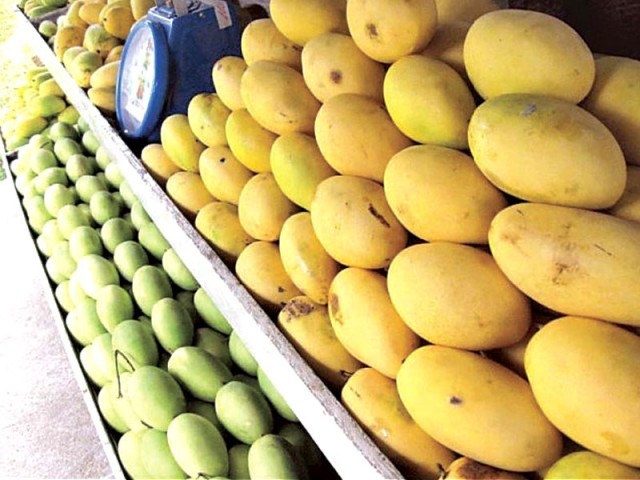 Pakistan registered with China for mango exports in 2006, however, it had been struggling to compete with other players because of high cost of air freight. PHOTO: FILE

After years of struggle, Pakistan finally added one of the world’s largest markets for its mangoes – China. The development, a major breakthrough in mango exports, will add millions of dollars to the country’s foreign reserves.

“Pakistan’s mangoes have become a centre of attraction in the largest retail chain of China – Walmart – where the king of fruit is being offered for sale,” Durrani Associates, one of the largest fruit exporters, said in a statement on Saturday.

The exporter was able to access the Chinese market, currently dominated by Taiwanese, Filipino and Thai varieties, after a sample of mangoes, shipped by sea a month ago, earned overwhelming success at Walmart stores.

The shipment contained two containers with 40 tons of mangoes. Firm’s Chairman Abdul Qadir Khan Durrani also visited China at that time and met with representatives of Walmart, which had 370 stores in 140 cities and four municipalities of China by March 1.

“It took us a while before we got clearance from Beijing,” Durrani said. The containers were held at the port and 20 cartons each were taken from both the containers for inspection, he said. After a week-long process, the Quarantine Department cleared the shipment by declaring that the mangoes were free from all diseases.

According to the statement, a three-member team of Chinese importers will visit Pakistan next week to strike an agreement for purchase of 100 tons of mangoes for Walmart stores in the running season.

The delegation will also visit the hot water treatment (HWT) plant – a facility set up for the processing and treatment of mangoes to meet international standards. They will inspect the arrangements for quality control.

India and Pakistan registered with China for mango exports in 2003 and 2006 respectively. However, both the countries had been struggling to compete with other players in China because of high cost of air freight, Babar Khan Durrani, Director of Durrani Associates, told The Express Tribune.

In China, mangoes of Thailand are selling at $1.5 per kg of mango, the amount the company pays in air freight alone, making it impossible to compete, Durrani said.

“Exporting mangoes by sea to China is a big breakthrough,” Abdul Qadir Khan Durrani, the chairman, said because it will bring freight cost down to $0.20 per kg of mango, which means Pakistan’s mangoes can sell for about $1.25 in Chinese stores.

China is one of the countries that applies global standards on mango imports. To meet the standards, mangoes are treated before export. There are four known ways of treatment, out of which three are recognised across the world – HWT, vapour heat treatment (VHT) and radiation.

“It’s because of the HWT facility that we have been able to meet international standards,” the chairman of Durrani Associates said, adding, this development has opened the doors for all mango exporters of Pakistan to tap the Chinese market.

Pakistan has a capacity to treat 15 tons of mangoes per hour. The private sector has the ability to shelve mangoes for 35 days after treatment while other exporting countries could shelve mangoes for maximum seven days, the statement claimed.

According to the chairman, Pakistan is world’s 5th largest producer of mango, which can produce up to 2 million tons. Mango varieties particularly Sindhri, Chaunsa and Sunehri can beat others because of their taste, he said.

“China can be the biggest market of Pakistani mangoes and within three years exports can be doubled,” he added.