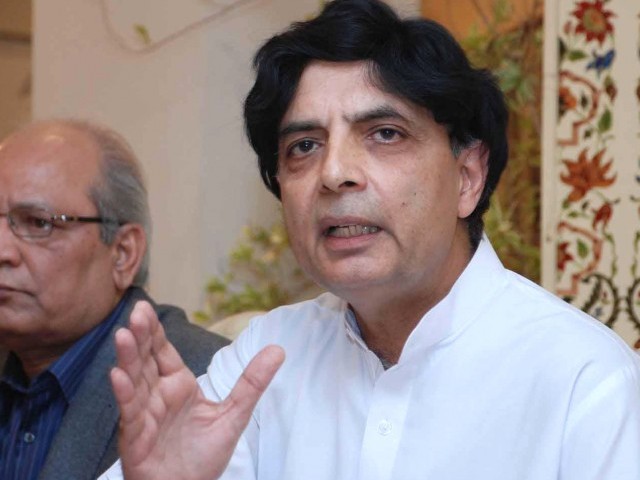 Amid reports of an offensive against militant bases in North Waziristan, the main opposition party, Pakistan Muslim League-Nawaz (PML-N), cautioned against a backlash, saying on Wednesday that any new military campaign will fuel terrorism.

“…The military should not plunge the country into a war at the behest of foreign powers,” said leader of the opposition in the National Assembly Chaudhry Nisar Ali Khan while addressing the media at Punjab House.

Nisar said the country had been suffering as a result of the US-led ‘war on terror’, and added that “launching a new offensive in tribal areas will surely ignite a fresh wave of unrest, extremism and terrorism.”

The opposition leader also asked the military’s top leadership to abide by parliamentary resolutions, and said that considering the government’s ‘unwise decision’ to resume Nato supplies, the people would never support a military operation in North Waziristan.

Contrary to Nisar’s assertions, Prime Minister Raja Pervaiz Ashraf, in his August 14 address, had said: “We have opened Ground Lines of Communications for Nato troops in accordance with parliament’s recommendations.”

US Defence Secretary Leon Panetta recently stated that Pakistan was prepared to launch combat operations against Taliban militants in North Waziristan, which also serves as a safe haven for the al Qaeda-affiliated Haqqani network.

According to Panetta, Chief of Army Staff General Ashfaq Parvez Kayani discussed the operation recently with the top US commander in Afghanistan, Gen John Allen.

Nisar said the opposition was not in contact with the government to discuss the next general elections. He even ruled out the possibility of his party negotiating with the ruling Pakistan People Party (PPP) in the near future.

On Tuesday, PM Ashraf had said that “for holding impartial and transparent general elections, we are taking the opposition into confidence. And for this we have taken a start with the consensual appointment of the chief election commissioner.”

Responding to a question about a caretaker interim government, Nisar referred to the procedure laid down in 20th Constitutional Amendment. He added that his party would contact other opposition groups after Eid.