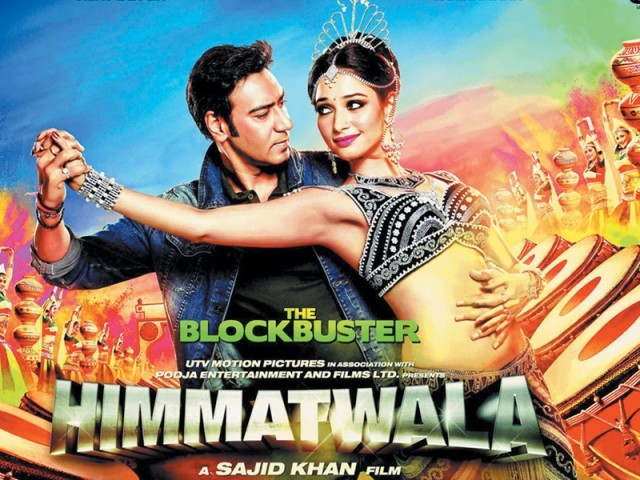 The first look of director Sajid Khan’s Himmatwala — which is based on the 1983 movie of the same name starring Jeetendra and Sridevi — is out and already garnering publicity for its old Bollywood feel. The poster of the film revives the retro waves of the 80s and even the caption reads ‘March 29, 2013 — The 80s Will Be Back’. The remake stars Ajay Devgn and Southern actress Tamannaah, according to Times of India.

Three posters of the film have been released so far out of which one shows Tamannaah dressed in a leather suit and holding a whip in her hand, while the other shows Devgn wearing a leather jacket and posing with tigers. The third shows the lead pair in a romantic pose.

Where film critics think it is a bit early to speculate the film’s performance at the box office, film-maker Sajid says he is sure Himmatwala will cross INR one billion within the first week. He claims he can never make a flop film.” Since my childhood, I have done nothing but watch films. Cinema is my life. I can never make a flop film because I make films for the audience and not for myself,” IANS quotes the director as saying.

Sajid, who has directed Heyy Babyy, Housefull and Housefull 2: The Dirty Dozen, adds: “I will never let down the audience. I have proved that three times.”

Devgn, who plays the lead in the movie, is also impressed with Sajid’s positive attitude. “I like that attitude. It is a kind of confidence which you should have,” he tells IANS. The actor himself is ready to imitate Bollywood’s ‘Jumping Jack’ Jitendra’s dance moves in Himmatwala. “I am ready to do anything, be it action or dance,” the actor adds.