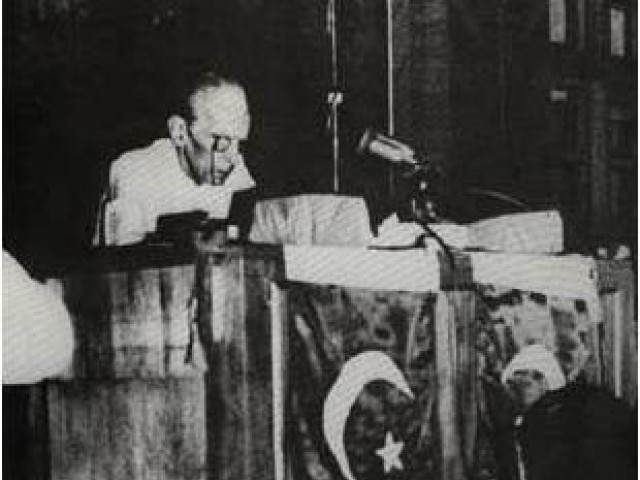 The original recording of Jinnah's address to the Constituent Assembly has gone missing.

Speakers and the audience at a seminar Jinnah ka Pakistan (Jinnah’s Pakistan) on Saturday agreed that the Quaid had wanted to keep religion and state separate.

The seminar was organised by the Awami Party in Model Town to mark Mohammad Ali Jinnah’s August 11, 1947 speech.

Jamil Omar, the party’s general secretary, compared Jinnah’s August 11 speech with the Gettysburg address by Abraham Lincoln and Jawaharal Nehru’s August 15 speech. Every child in the United States and India knows these speeches by heart since it is part of their syllabi, Omar said, but in Pakistan this speech has been censored from the press and never included in school syllabi.

The people of Pakistan should know the speech by heart, he said, but the few who know about it have seen only a censored version of it. Omar said the speech had touched upon four important points: that nepotism will not be tolerated; that the government’s “first, second and last” responsibility is the people’s welfare; that citizens of all faiths will be treated equally; and that Pakistan is an independent and a self-sufficient country.

He said it was the third point which had led to the speech being blacked out. Jinnah had reiterated secularism and wanted to keep state and religion apart, said Omar.  If these four points had been adhered to, he said, Pakistan could have been the best country in the world.

He said the Quaid had objected to slogan Pakistan ka matlab kia, La ilaha illallah. Quoting from Malik Ghulam Nabi’s book Daghon ki Bahar he said during his last address to All India Muslim League in December, 1947, a man had asked the Quaid if the slogan was the foundation of Pakistan’s ideology. The Quaid had told him that was not what Pakistan stood for, Masood said.

He also quoted Thomas Jefferson who had warned that if church was not separated from the state half the people will be hypocrites and the other half stupid. “We should not care if Jinnah was a mullah, a secularist or a pluralist; a nation-state by definition is a secular entity,” he said.

IA Rehman urged the participants to reflect on Jinnah’s views. He said Jinnah had wanted a government that worked for the citizens’ welfare and a country where everyone had equal rights.

After the speeches, the participants asked the party to demand that the clauses added to constitution during General Zia’s rule be removed and the Objectives Resolution declaring Pakistan an Islamic state be denounced. They also demanded that the federation should retain minimal authority and give more powers to the provinces.