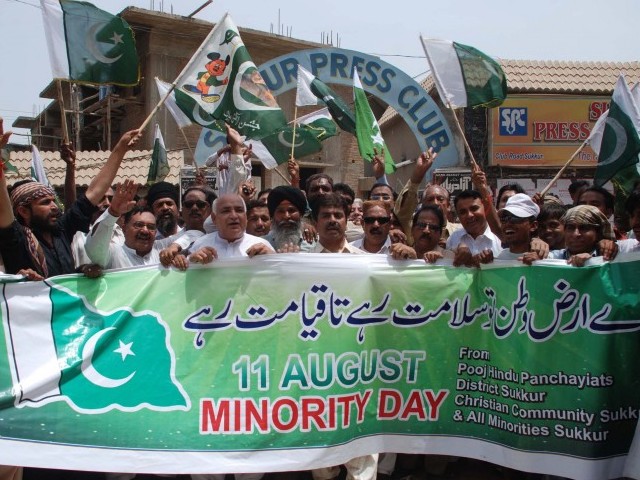 In celebration, the minorities of Sukkur took to the streets in large numbers and held a rally. PHOTO: EXPRESS/NAEEM AHMED GHOURI

For those who feel that their voice goes unheard, National Minority Day on August 11 was a day long awaited by the Hindu, Sikh, Christian and other marginalised communities. “We are happy that the government has marked a day for minorities in Pakistan and today we are observing it for the first time,” said Sukkur Hindu Panchayat president Mukhi Eshwar Lal while talking to The Express Tribune.

In celebration, the minorities of Sukkur took to the streets in large numbers and held a rally, which was led by Lal and Chak Hindu Panchayat president Nand Lal Panjwani. Carrying the Pakistani flag, colourful banners and shouting slogans of ‘Pakistan Zindabad’ and ‘Jo Boley So Nihal, Sat Sri Akaal’, the rally began from Dharam Shala and ended at Minara road.

This celebration, however, was bittersweet for Lal, who was more concerned about their fundamental rights. “Simply giving a day to celebrate is not enough and the government must take concrete steps to safeguard our rights. Like our Muslim brethren, we, the members of minorities are doing our best to serve the country, then why are we denied our rights,” he asked. He added that they were all Pakistani and love their ‘Matar Bhoomi’ (motherland) just like their forefathers and other Pakistanis.

A life insurance agent participating in the rally, Ram Chand, was happy that the government had given them a day to observe and express their feelings. “We have been living in Pakistan for centuries and are true Pakistanis.”

Talking about the cases of kidnapping and forced marriages of Hindu girls, Lal said that the Hindu community was a peace-loving, business community and were being harassed. He added that after kidnapping Hindu men and children for ransom, people have now started kidnapping Hindu teenage girls, who are later forcefully converted and married off. The girls are then produced before the media a week after being kidnapped.

“If a Hindu girl wants to convert, she should be given the freedom to think it over and then make her decision,” said Lal. Such girls have no choice but to go with their husbands because they lose every thing during their captivity and therefore cannot go back to their parents.

“A handful of people are trying to harass the Hindus but there are Muslims, including elected representatives, sardars and influential people, who are supporting our community,” said Chak Hindu Panchayat president Nand Lal Panjwani. He added that Hindus face problems and so do Muslims but they must overcome them together as they are all Pakistanis. He complained, however, that minorities are denied five per cent quota in government jobs, which is unfair and unjustified.

A cloth merchant, Sardar Lal Singh, who belongs to a Sikh family, said that he used to sell cloth in different localities of Sukkur and its outskirts on his motorcycle.

“We don’t have many problems here except that the government is not implementing the five per cent minority quota for government jobs and thus our literate youth is unemployed.”

The Hindu youth is denied respectable jobs in the government department, said a sweeper in the railway department, Kavi Kumar. When asked about his education, he replied “I am an Angootha Chaap”.