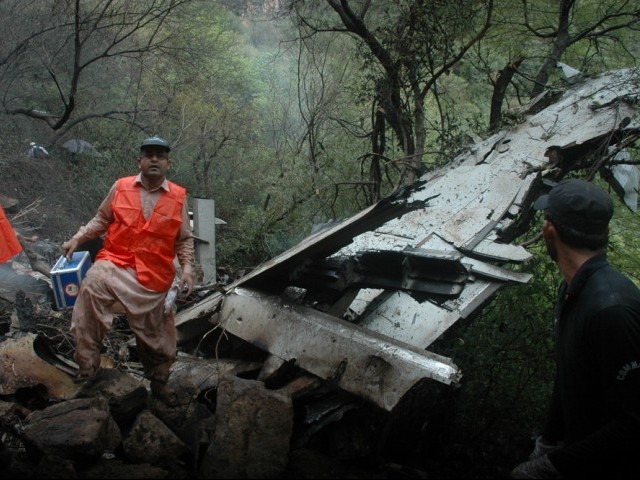 Rescue workers at the site of the crash may have mixed together various body parts. PHOTO: QAZI USMAN

ISLAMABAD: Twenty-five days have passed since a tragedy struck the Islamabad-bound Airblue flight but the simple issue of settlement of compensation to the 154 victims – instead of being solved – has been made more complicated and controversial.

The authorities are still not clear as to how much, when and under which law/convention the compensation should be paid.

The legal heirs are also not being kept in the loop, which has made the issue more confusing. “It is a complicated  and sensitive issue involving different laws and it is very difficult for us to give you the exact amount or the date when we would disburse the compensation money,” admits Sharjeel, Airblue’s general-manager marketing.

As most of the crash victims were the lone breadwinners for their families, the delay in payment of compensation has made the life of their heirs more miserable.

“We are not even being paid the compensation of Rs500,000 announced by the government,” says widow of a victim from Khyber-Pakhtunkhwa.

Sources in the aviation industry say that Airblue is facing serious legal complications in settling the compensation package as it involves a raft of national and international laws.

“Airblue may not face any financial crisis even if it pays off substantial sum to the heirs of each victim as their aircraft is heavily insured at a worth of $35 million,” says Agha Jan, an insurance expert. “After paying the amount in Pakistani rupee, enough will be left for the carrier to cover the damage caused by the fatal crash,” he added.

However, aviation law experts describe the issue as a knotty one, and say that the compensation depends on the outcome of the result of the flight data recorder (FDR), commonly known as black box.

“If it is proved that the crash occurred due to some fault in the aircraft or because of pilot’s negligence then the carrier will have to pay much higher amount than is fixed under the Air Act 1934, duly amended with SRO 1967 (Rs39,500) or agreed by the Airblue (Rs10 lakh),” says aviation jurist Moeedur Rehman.

“However, if it was an act of God (beyond human control) then liability would be limited up to the agreed amount,” he adds. If negligence is proved, then the claim amount has no limit. The claimant can get a much higher compensation through the court on proof of greater loss, the jurist says.

“The family members can approach the courts as well for the purpose as happened in the PIA Fokker crash case of Multan,” he adds.

Experts also believe that if the management of airline did not handle the situation prudently, then it may face serious financial and legal complications as the Carriage by Air Act 1937 says one thing, while the CAA law, including Montréal Convention to which Pakistan is a signatory, says something else.

“The draft Carriage by Air Act, although cleared by the cabinet, is still pending before the parliament for the last four years, leaving a lot of confusion for the heirs of the victims, including the air carrier,” says Faisal Kamal, an aviation lawyer from Karachi.

“Pakistan is a party to the Montreal Convention of 1999, which says that passengers be given 113,100 SDRs (special drawing rights) in damages,” the lawyer says, adding that this comes to approximately Rs14.6 million in today’s value.

“Insurance companies and some aviation jurists are arguing that the Montreal Convention covers only international carriage. But CAA rules and Carriage by Air Act 1937 treat a domestic and international flight alike so there cannot be any discrimination,” he adds.

Fahad Zulfiqar, who also lost his 29-year-old brother Haider Zulfiqar in the crash, and other bereaved families, have appealed to Chief Justice of Pakistan Iftikhar Muhammad Chaudhry to take notice of this issue for the provision of quick relief and justice to them.