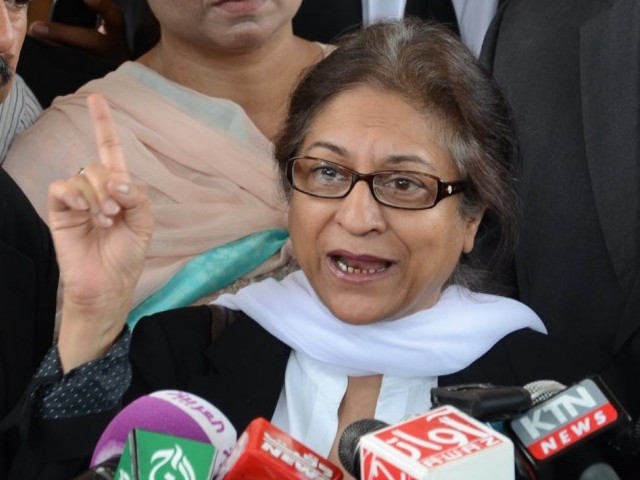 Addressing the media after the hearing, Jahangir said that the judges of the apex court are themselves undermining the institution implying that democracy will not flourish in the country.

“The hearing could have been fixed after Eid. What was the haste?” questioned Jahangir and said that the prime minister was not running out of the country.

Strongly reacting on the court’s orders, Jahangir remarked that when the court gives rulings based on political bias and strategy instead of law, the common man loses confidence in the courts.

“During the last hearing, the court had hinted a middle way out but today’s attitude of the court was contrary to the previous. It reflects a strategised and planned ruling,” maintained Jahangir, adding that the attitude of the judges can lead to irrecoverable loss if they are planning or are part of a planning against the government.

She further maintained that the court should see Chief Justice Iftikhar Muhammad Chaudhry’s son Arsalan Iftikhar and Prime Minister Ashraf with the same eye of justice. “We want a strong judiciary, not a powerful one.”

Jahangir added that she does not support the new contempt of court law as many of its sections are against the spirit of the Constitution but restrictions cannot be imposed on the parliament taking away its right of legislation.

She further said that she has nothing to do with the issue of writing letter to the Swiss authorities but wants the judiciary to give its verdicts in line with the Constitution. She added that she had fought and would continue to fight for the independence and supremacy of judiciary “but keeping in view the conduct of the Supreme Court, it seems democracy will not work”.

Attorney General Irfan Qadir, speaking to the media, also expressed his concern over the court orders and said that he was not expecting the court to summon the prime minister.

“I am hopeful that the court will observe restrain, and hopefully a middle way out will be adopted,” said Qadir. “I, being the mediator, will try to find a peaceful resolution of the issue instead of a confrontation.”

Jahangir said that the Pakistan Bar Association is a professional body of lawyers and it should not go on strike if a matter is sub judice before the court.

“If the bar expresses jubilation about a sub judice matter, there will remain no difference between a lawyer and a politician,” she maintained.

“Our community and Bar Associations are being destroyed. These bars should not be turned into devotees’ club, these bars are not a branch of any judge,” she added.