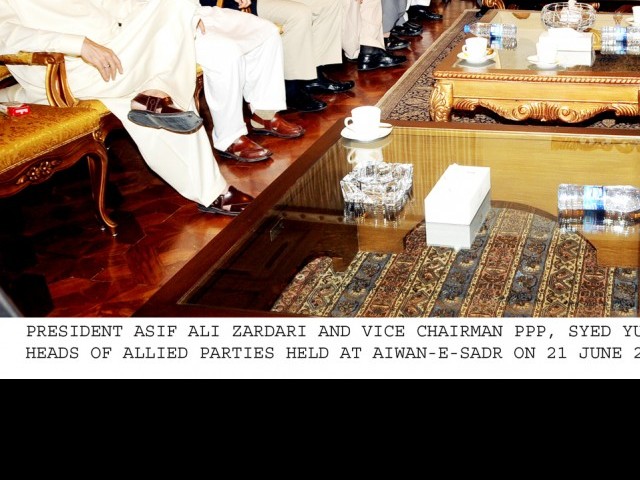 ISLAMABAD: The Pakistan Peoples Party and its allies have agreed to revert to their own stomping ground, the Parliament to come up with another law to replace the Contempt of Court bill which was struck down by the Supreme Court on Friday, Express News reported.

Meeting with President Asif Ali Zardari at the Aiwan-e-Saddar in a post-iftar meeting, all allied parties said agreed to dissect the new law on the floor of the parliament.

Reportedly, those present in the meeting drew strength from the President’s statement that “the Parliament is supreme.”

It is expected that an appeal will be filed against the SC decision on the previous law.

The meeting, attended by Prime Minister Raja Pervez Ashraf, discussed the law and the decision by the apex court and the developing political situation in the country.

It was decided to review the deficiencies pointed out by the supreme court and come up with a new draft bill which will be debated in the parliament.

The participants of the meeting also discussed the deadline given by the Lahore High Court over President Zardari holding two offices, that of President of Pakistan and co-chairman PPP.

Since the meeting had been initially called two days ago to discuss the energy situation, the Prime Minister briefed the gathering on that front.