Experts say it could take years to solve shelter crisis

Experts say it could take years to solve shelter crisis

“The scenar­io is bleak and our politi­cians don’t realis­e the gravit­y of the situat­ion."
By AFP
Published: August 22, 2010
Tweet Email 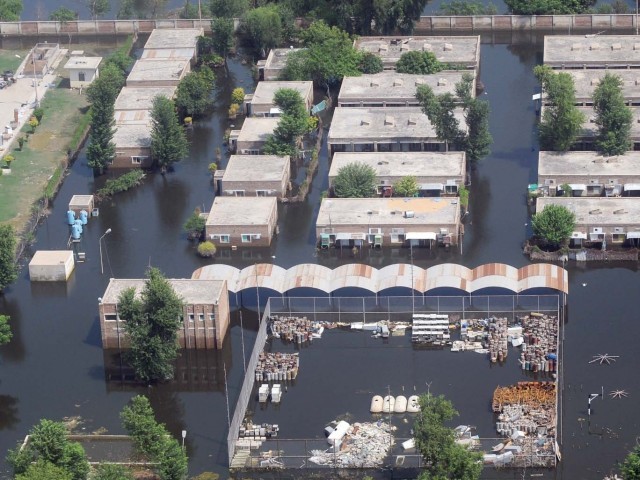 An aerial view of a flooded area of Muzaffargarh. photo: afp

KARACHI: With entire towns and villages swallowed up by the devastating floods, experts say it could take years to solve a shelter crisis, now facing up to 4.6 million people camped out under open skies.

“The scenario is bleak and our politicians don’t realise the gravity of the situation. We need $3 billion to rebuild huts and houses, and another $7 billion to restore destroyed infrastructure, canals and government offices”, independent economist AB Shahid remarked.

Few words however, can express the misery.“Everything has been wasted. Nothing is left,” said Qasim Bhayyo, 45, a refugee from the Qayyas Bhayyo village in one of the worst-hit parts of Sindh, which was formerly known for rice crops and fish farms.

“I saw my house of wood and mud washed away. We stockpiled food for months. It was all destroyed. We had no way to save our goats and buffaloes stranded in the water and crying,” Bhayyo said.

The floods have washed away landmarks and official records, making it even more difficult for authorities and the owners to judge locations.

Tasneem Siddiqui, a housing consultant and former head of Sindh housing schemes, fears that red-tape, inefficiency, an unpopular administration and corrupt politicians, could put rehabilitation back by years.

“The fact is our government is inactive and our bureaucracy disorganised. They shouldn’t take on the entire process of rehabilitation. Instead clear the flooded areas and involve communities in self-help,” Siddiqui said.

He also remarked that the government would do better if they provided farmers with free fertilisers and seeds, interest-free crop loans, and improved the drainage system.

Anwer Rashid, a director at the Orangi Pilot Project, which provides low-cost sanitation, health, housing and microfinance in impoverished areas, said it plans to build 5,000 low-cost houses for flood-affected people.“We estimate 19,000 rupees (220 dollars) are required to construct one shanty house. We’re busy generating money to provide as many houses to people as we can,” Rashid said.

The old, frail and forgotten