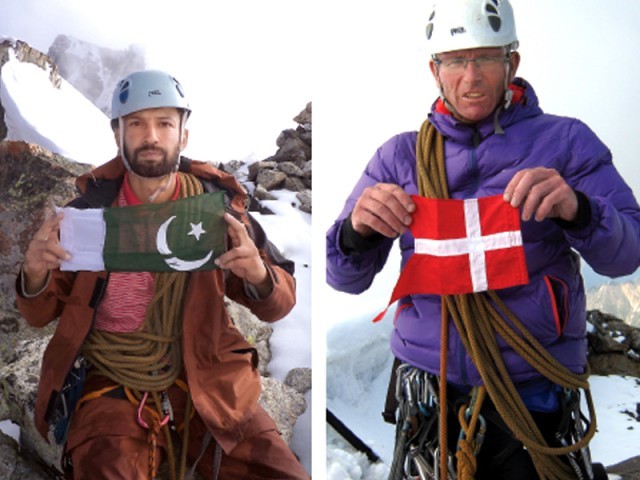 A Pakistani climber and a Danish diplomat have made history by scaling one of the most challenging peaks in the country, said a press release issued by Danish Embassy on Thursday.

The five-day expedition was held to express growing friendship between Pakistan and Denmark, during which the duo reached the top of Malika Parbat (North Peak), the highest peak in Kaghan Valley which stands at a height of 5,290 metres.

The initiative carries a special significance as it marks the first-ever summit of North Peak by a Pakistani citizen.

“It was really important for me to take part in this ascent with a Pakistani climber to express Denmark’s friendship with this country,” said Danish Deputy Head of Mission Jens J Simonsen upon his return.

“Pakistan is a country with numerous strengths, its beauty is breathtaking, most of the people who come from abroad know little about this side of the country,” he added.

Imran Junaidi, the Pakistani climber, also expressed pleasure over being a part of the expedition, adding that he was happy to have taken the challenge.

“It was no doubt a challenging task but some things are worth fighting for your friendships and dreams,” he remarked.

Malika Parbat, due to its steepness, is considered unscalable among locals.

Apart from the duo, only eight climbers have scaled the mountain so far. In 1920, Captain B W Battye and four Gurkha soldiers reached the top for the first time, followed by a second ascent by three mountaineers in 1967.

Condolence: Shehzad Ahmed – a poet distinguished by his command over multiple fields