Extortion, killings: Businessmen may take up arms for their defence

Extortion, killings: Businessmen may take up arms for their defence

Unregi­stered mobile phone SIMs are used to threat­en them.
By Our Correspondent
Published: August 3, 2012
Tweet Email 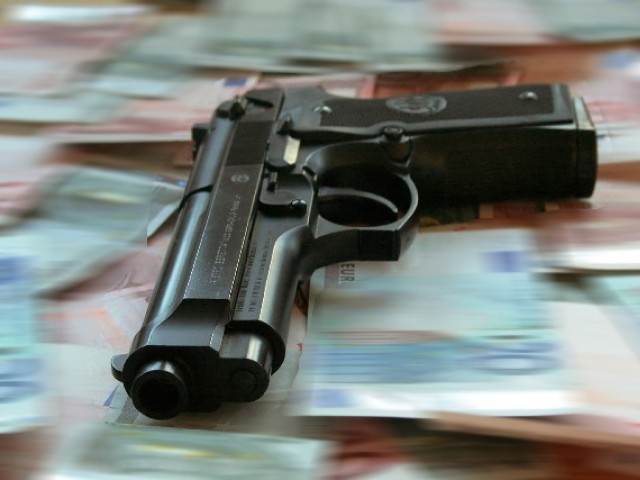 Former KCCI president Siraj Kassam Teli said he was going to ask every businessman to carry arms and be responsible for his own security. PHOTO: FILE

KARACHI: Office-bearers of the Karachi Chamber of Commerce and Industry (KCCI) on Thursday said they would take up weapons to defend themselves if law enforcement agencies failed to end extortion, targeted killings and kidnappings for ransom.

Addressing the business community and media in the presence of Sindh Inspector General of Police Fayyaz Ahmed Leghari at KCCI, former KCCI president Siraj Kassam Teli said he would quit chamber politics for good if the poor law and order situation persisted after Eid.

“Enough is enough. We’ve lost patience with the government as well as the Sindh police,” said Teli, who is also the chairman of the Businessmen Group, whose favoured candidates have won KCCI elections unopposed for many years. KCCI is the largest chamber of commerce and industry in Pakistan with over 18,000 members.

Taking a cue perhaps from the influential gun lobby of the United States, Teli said he was going to ask every businessman to carry arms and be responsible for his own security. “I’m in favour of a free-for-all. A criminal wouldn’t have the courage to pull a gun in a crowded bazaar if no gun rules existed.”

Calling Interior Minister Rehman Malik a “liar,” Teli said the federal and provincial governments, along with the Sindh police, had shown little willingness to curb rising incidents of extortion so far.

Expressing his dismay over the frequent use of unregistered mobile phone SIMs to send death threats to the business community, he accused the federal government of criminal negligence and deliberate ineffectiveness.

Responding to the comments of Teli, Sindh IGP Leghari said the biggest challenge facing the provincial police was extortion. Kidnappings for ransom and street crimes are the next priorities of the police department, he said.

“I’ve proposed that neighbourhood committees should be formed in all markets where members of traders’ associations, in cooperation with police personnel, take care of law and order,” Leghari said.