One bomb was plante­d under a push-cart, the other took place in the parkin­g lot just outsid­e the fruit market's gate.
By Web Desk / AFP
Published: August 1, 2012
Tweet Email 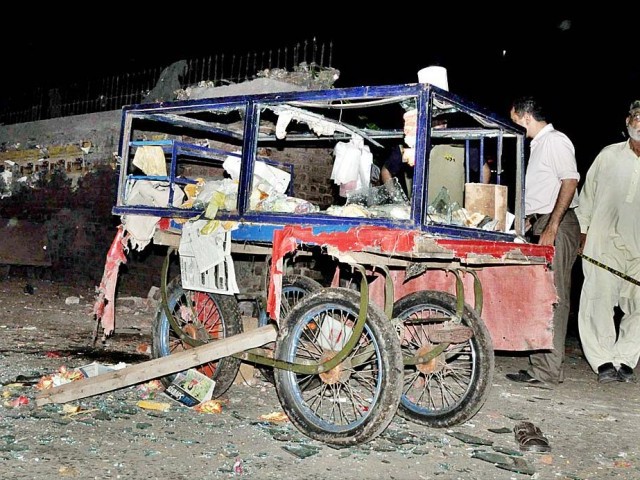 Two blasts took place one after another in the market. PHOTO: APP

Rescue services and police officials have reached the spot and are shifting the injured to Mayo hospital. The condition of two of those is described to be critical.

There are no reports of casualties as yet, and the nature of the explosions also remains unknown, an offical said.

“We killed a senior Taliban commander in Multan today, so we were expecting such kind of response from the terrorists. Although nobody has claimed this attack, we can’t rule out the retaliation,” police chief Habibur Rehman told AFP.

A source said that one of the bombs had been planted under a push-cart, while the second of the two blasts took place in the parking lot near the main gate to the fruit market.

Express News correspondent Fayaz Hussain said that the first blast was a small bomb that went off near a garbage heap which injured two people. The second was relatively larger and blew up 100 yards from the first and injured more people.

He added that police is searching for traces of any further bombs which may have been planted by terrorists.

Security has been raised to high alert in Lahore in the immediate aftermath to reports of the blast. Security checks on all routes leading to and from Lahore have been increased.

Interior Minister Rehman Malik taking note of the blats in Lahore, directed the FIA to reach the spot and provide all possible assistance to local police to conduct investigations and arrest those responsible for the act.

He also condemned the act, terming them as acts of cowardice.