Transgenders take to the streets against drones

Transgenders take to the streets against drones

The protes­tors were led by Sanam Fakir, who heads a welfar­e trust.
By Our Correspondent
Published: July 31, 2012
Tweet Email 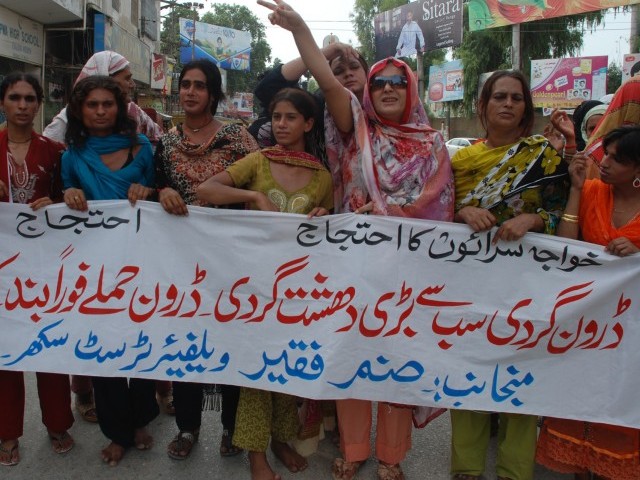 Dozens of people held a rally and demonstrated at the Minara road to protest against Nato supply routes being reopened and drone strikes. PHOTO: EXPRESS/NAEEM AHMED GHOURI

Drone strikes have inspired protests by political parties and religious groups, and on Monday the transgender community in Sukkur joined them in their outrage.

Dozens of people held a rally and demonstrated at the Minara road to protest against Nato supply routes being reopened and drone strikes. According to the protestors, drone strikes are counterproductive and result into collateral damage, which is intolerable.

The protestors were led by Sanam Fakir, who heads a welfare trust. The protestors made their way from the clock tower through the main roads of the city to Minara Road.

Sanam Fakir condemned drone strikes in Pakistan’s tribal areas. Fakir said that thousands of innocent men, women and children have been targeted in the ‘merciless’ drone strikes, but the government was not taking concrete efforts to stop them.

Fakir said that the US claims that it is targeting terrorists by the drones but asked who was responsible for the deaths of innocents. According to Fakir, drone strikes are greater acts of terrorisms. To further elaborate, Fakir asked that if terrorists were to enter a school in the US and take students hostage, the US would not send drones to fire missile on the school but would find the safest way to kill or arrest the terrorists without harming the children.