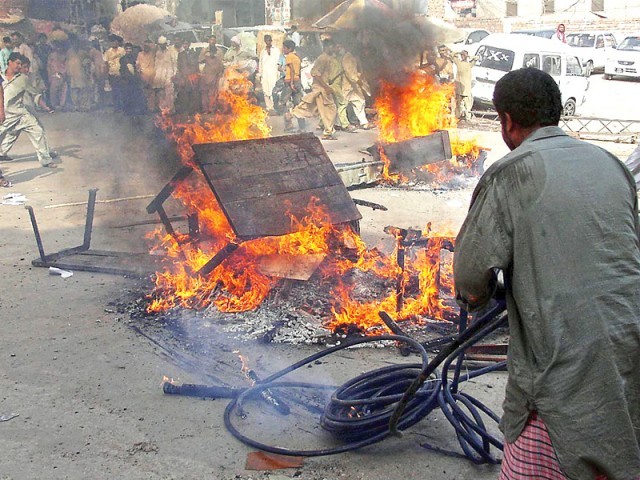 As promises to curb load-shedding in Ramazan during Sehar and Iftar continue to remain unfulfilled, infuriated crowds hit the streets across Khyber-Pakthunkhwa (K-P) and Punjab on Sunday, often turning violent.

After load-shedding reached up to 20 hours in some rural areas of K-P and the Federally Administered Tribal Areas (Fata), an angry mob attacked a Water and Power Development Authority (Wapda) installation and burnt down its subdivisional office in Charsadda.

The ruling party in K-P, Awami National Party (ANP), also came under attack – a party billboard was broken while protesters chanted slogans against the party as well as Wapda.

In both areas, the police opened fire to disperse the demonstrators and registered an FIR against them.

The Charsadda District Coordination Officer (DCO) convened an emergency meeting  and told Pesco officials to resolve the crisis within 24 hours, warning that the district administration would not ‘protect them’ if they were unable to do so. A grand jirga of Shabqadar Haleemzai tribe was also held to discuss the extent of the load-shedding. The jirga demanded the dismissal of Shabaqadar’s Pesco executive engineer.

In Punjab, equally irked demonstrators protested violently, especially in Multan, after the electricity shortfall reached 5,139 megawatts (the highest this Ramazan). Hundreds of protesters in Multan and Khanewal not only burnt Multan Electricity Supply Corporation (Mepco) offices but also attacked vehicles.  Many of the protesters were armed, and were carrying weapons as well as iron rods. Mepco officials estimated the losses caused by the vandalism to be Rs500,000 at least. They added that several items had been stolen from their offices. According to reports, police only arrived at the scene after the mob had dispersed.

In New Multan colony, protesters attacked shops belonging to traders who did not participate in the protests. Protesters in Khanewal said that the electricity shortage meant there was no water to drink or to use for offering prayers during Sehri and Iftar.

Similar scenes were witnessed in Muridke, where 300 people protested while burning tyres and chanting slogans against the government. Protesters then headed towards Shamka grid station where the police intercepted them, but the angry mob managed to bypass a baton charge and vandalised the station as well as a police van. Three protesters and two police officials were injured and taken to the hospital for treatment.

An FIR has also been lodged against the protesters in Muridke Police station.

A similar protest was also reported from Mamonkanjan where a group of women attacked the Fesco grid station.

In Lahore, more than a hundred people protested on Ferozepur Road, causing a massive traffic jam for two hours. A similar scene played out near Ring Road Gandi Babian.

This was the second consecutive day of protests in Lahore, where separate protests took place on Saturday.

In Attock, journalists decided to launch an indefinite but peaceful protest against load-shedding.

Protests took place throughout K-P, not just in Charsadda and Shabqadar. People came out on to the streets in Chitral, Upper Dir, Lower Dir, Malakand, Batkhela, Mardan, Swabi, Shangla and Nowshera. Demonstrators also burned down the main grid station in Swabi and set fire to Pesco documents and furniture while police baton charged the mob. Nowshera witnessed similar vandalism at its own grid station.

In Frontier Region Dera Ismail Khan, the Shirani tribe boycotted a polio vaccination campaign in protest against load-shedding. Meanwhile, people in South Waziristan’s Wana sub division took matters into their own hand by making their own “electricity comittee” which comprises a representative of each sub-tribe of Ahmadzai Wazir. In North Waziristan, yet another jirga meeting demanded that the government solve the load shedding problem, threatening protests otherwise.

In Bannu, 12 tribal men were arrested for stealing electricity from North Waziristan’s main supply line and cutting of the region’s power supply as a result. The men said they would not allow the supply to be restored until Bannu’s electricity problem was not resolved.

WITH ADDITIONAL REPORTING BY OUR CORRESPONDENTS IN FAISALABAD, ATTOCK, LAHORE AND PESHAWAR