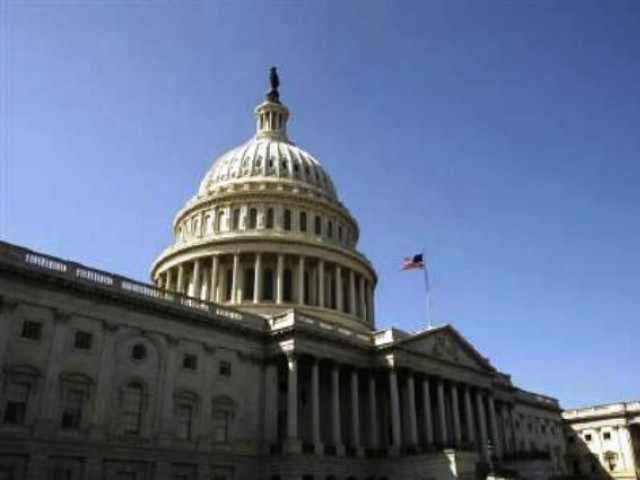 Senator Rand Paul said he would call for a vote on his bill after Dr Afridi's appeal hearing on August 30. PHOTO: REUTERS/FILE

WASHINGTON: United States Senator Rand Paul has announced that he will delay vote on a bill until after Ramazan that aims to cut all US assistance to Pakistan if Dr Shakil Afridi is not released.

Speaking on the Senate floor on Tuesday, Senator Paul vowed that despite the decision to defer the voting on the bill, it will not swept under the carpet. “I have a bill and I have the votes necessary to demand a vote in the Senate, no matter what the leadership wants, we will have a vote on ending all of Pakistan’s aid, if this political prisoner, Dr Shakil Afridi, is not released,” he warned.

Senator Paul said that since Dr Afridi’s appeal hearing has been rescheduled to August 30, after the month of Ramazan, he too will delay his vote for a month, “to see if the appeal works, to see if he is still safe in one month.”

Senator Paul had earlier threatened to force a vote on the bill this week.

“Imprisoning the man that helped us get one of the world’s worst mass murders is not a way to encourage cooperation between our countries. This episode of imprisoning this man is driving a wedge between America and Pakistan,” he said, telling of lingering feelings over Osama bin Laden, a year after US Navy SEALs killed the al Qaeda chief, acting on intelligence part of which Dr Afridi helped gather.

Senator Paul added that he would push for a vote on his bill in late August or in early September.

“I hope some common sense will intervene and they will let him go, but at the very least Americans need to know that Pakistan needs to cooperate with us, Pakistan needs to help this man, and that we all should be proud of what he did to help us get Bin Laden,” the Senator hoped.

In a week when the US House voted to cut $650 million in aid to Pakistan and Senator Rand Paul stalled his no-aid-till-Dr Afridi’s-released bill, Pakistan Ambassador to the US Sherry Rehman met with the Democratic party’s Leader in the US Senate Senator Harry Reid to talk about the improving bilateral ties.

Senator Harry Ried had in June blocked another bill by Senator Rand Paul which too called for ending all US assistance to Pakistan.

A spokesperson for the Pakistan Embassy said that the Ambassador and the Senator discussed bilateral relations between both countries. According to an Embassy press release, the two talked about Pakistan’s role in improving the regional security situation.

“Ambassador Rehman briefed the Senator on Pakistan’s efforts to improve relations with the neighbouring countries Afghanistan and India. She also thanked him for his personal contributions and efforts to strengthen relations between the two countries,” the spokesperson said.

The Pakistan Embassy spokesperson added that the meeting between the Pakistani Ambassador and the Senate Majority Leader was part of their ongoing effort to “apprise the US leadership on the Hill of Pakistan’s position and concerns on the bilateral and regional developments.”

Senator Reid had in June blocked Senator Paul’s farm bill calling for an end to US assistance to Pakistan, stopping if from making it to the Senate floor for a vote when by “filling the tree” against introducing an amendment to the draft bill. “Filling the tree” is a move that allows the Democratic leader to only permit a certain number of amendments to the bill.

Speaking on the Senate floor last week, Senator Harry Reid said, “we have for example one Republican senator, when we’re in tense negotiations with Pakistan on a lot of very sensitive issues,that wants to do something that’s outside the scope of rational thinking which holds legislation up.”

Last week the House had also voted to ask the Secretary of State to submit a report asking if the Haqqani Network met the criteria of a Foreign Terrorist Organisation.