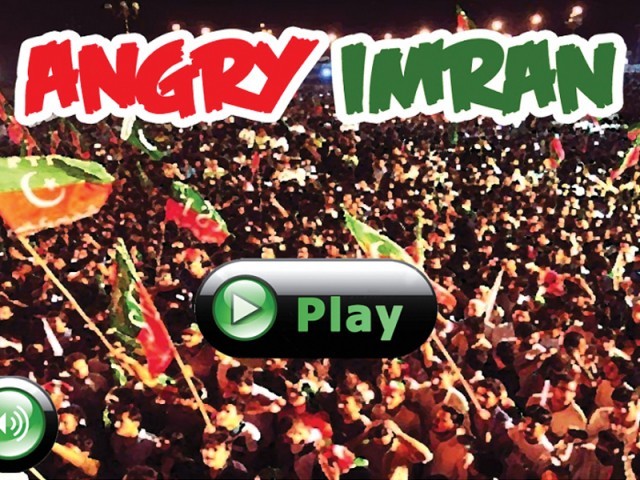 The Pakistani political scene provides fodder to the local gaming industry, as creators of Angry Imran talk about their inspiration and future plans.

“Tabdeeli Agayi Hai!” shouts a triumphant, yet still angry, Imran Khan who has just used his big round head to send Pakistan’s entrenched politicians rolling in the dirt. City after city has fallen to Khan and the revolution is very much at hand. This isn’t a look at post-election Pakistan, but rather the victory screen of Angry Imran, an Android app developed by a team of Pakistani game developers known as CreatriXe. It can easily go the other way, of course, with Nawaz Sharif, President Zardari, Asfandiyar Wali and Rehman Malik cackling in glee at Khan’s defeat.

Sound familiar? That’s because it is. You have probably already spent hours catapulting hundreds of red, blue and black birds at grunting pigs in Rovio’s massively popular and addictive Angry Birds game. Well Angry Imran isn’t just the localised version/ spin-off of the viral game but is also a demonstration of the designers’ own admiration for PTI chief Imran Khan.

The three budding game developers — Muneeb Ali, Hina Zafar and Ameed Ansari — admire Khan to the extent of developing an entire game based on him, but they insist their latest offering is just a business venture and has nothing to do with their liking for the Khan.

“We are not officially affiliated with the PTI, but yes, we do like Imran Khan. I would definitely vote for him. But the game was just based on an idea of depicting the current political scenario of the country,” says Ali. “You can see the game is not political at all. Imran Khan doesn’t come in the game saying: vote for me.”

And just because they like Imran Khan doesn’t mean that they’re going to reject any other offers that come their way. Ali is clear that CreatriXe is open to doing projects for any other political party that approaches them. “We’ll deal with them as our clients, without any discrimination,” Ali adds in a professional tone. Clearly, while politics is politics, business is business.

The release of the game — which was launched on May 29, two days after the PTI rally in Islamabad — was initially planned on the day of the rally, to garner hype amongst PTI supporters, but its implementation took more time than expected, which also resulted in the low quality of the game.

But just like everything else related to Imran Khan tends to go viral on social media, this game too received unexpected traffic. “We got around 10,000 downloads in just the first week,” says Ali who credits the numbers at least in part to the PTI’s social media presence. The download rate grew exponentially from there, and the game currently stands at around 50,000 downloads.

Hina Zafar, who has been working as an Android team leader for an international company, adds that she was personally surprised that even those who do not support Imran Khan appreciated the game.

The appreciation has led the young developers to aim for more. “Our next version will also be based on Imran Khan. It will be a continuation of Angry Imran,” says Ali who adds that the game will be released online as well as on Android.

“You’ll find some nice graphics, improved game play and yeah, new sounds too. It’s not the final version, and we are launching it as a Beta 2.0 to bring more excitement with more levels. We are also planning to include a few bonus levels in this version, which will hopefully be added by August 14.”

Even though the game is very similar to the original Angry Birds, the makers of Angry Imran do not fear facing any legal action over the issue. “We are fully aware of the moral and legal implications of IP [Intellectual Property] infringement, but we’re not legal experts and if the creators of Angry Birds think we have infringed their rights they should contact us and we’ll gladly rectify our mistake,” say the developers.

Releasing Angry Imran on iPhone is also one of the goals of the company, but that will not happen any time soon due to expenses and a lack of interested investors — a problem which many start-ups in Pakistan face. “Waqas Arif , the venture capitalist backing us, was willing to invest the initial seed money, but of course he cannot keep on investing, especially when we haven’t achieved any real financial breakthrough,” says a disappointed Ali.

The game itself may not have made them millionaires, but it has at least put their names — and talent — out there.

“Our country works in a weird way. Before we launched Angry Imran, no one was willing to hire us. We didn’t even reach the interview stages when we applied. But since the launch, each of us have received excellent job offers from multinational companies,” says Ali. “The offers are of no use anymore. We want to continue with our business.”

The plans of the team include cashing in on the growing Pakistani smartphone market and to partner with some major players in the telecom industry. “We plan to introduce an innovative model where your credit card is replaced by a cell phone credit card allowing you to purchase apps and make in-app purchases without the hassle of having to integrate a credit card. It’ll be a win-win situation for the users, the telcos and the app developers,” say the team.

So, with the political climate promising to heat up with the impending election season, the Angry Imran team may have more projects on their hands very soon. And who knows? Perhaps the next game we’ll see will be a Mortal Kombat style showdown between the Chief Justice and a succession of PPP Prime Ministers? Fatality!