Three astronauts blast off for ISS on Russian rocket

Three astronauts blast off for ISS on Russian rocket

They will reach the Intern­ationa­l Space Statio­n after a two day journe­y.
By AFP
Published: July 15, 2012
Tweet Email 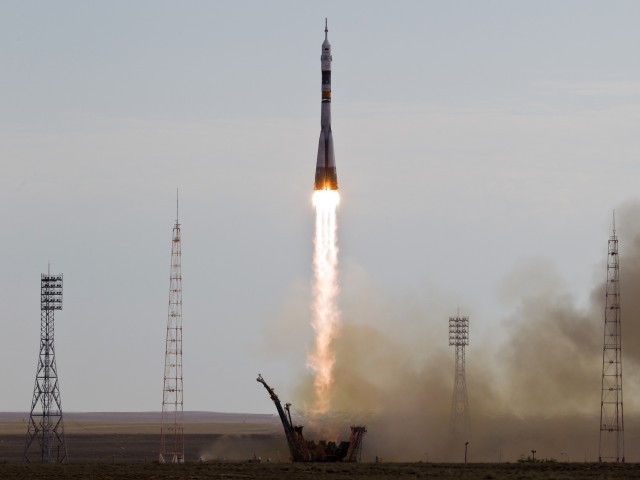 The rocket will reach the International Space Station after a two day journey. PHOTO: REUTERS

BAIKONUR, KAZAKHSTAN: A Russian rocket carrying an international crew of three blasted off without a hitch Sunday for the International Space Station in the first manned mission in two months.

NASA’s Sunita Williams and Japan’s Akihiko Hoshide and Yury Malenchenko of Russia started their journey on top of the Soyuz-FG rocket under the clear blue sky of the Kazakh steppe on schedule at 0240 GMT.

“Motion parameters are nominal,” Malenchenko reported to Russian ground control about two minutes after the booster rockets separated from the accelerating spacecraft.

Live footage from inside the Soyuz TMA-05M capsule that will dock to the ISS after a two-day journey showed a small red doll in a red dress hanging before the three space travellers as a good luck charm as the rocket gathered speed.

The astronauts read calmly through printouts of their crew procedures while mission commander Malenchenko picked at some of the more distant controls on the panel with a black stick in his hand.

“That is one of the more low-tech aspects of the Soyuz spacecraft,” the NASA flight commentator said in a live video feed.

“Some of those buttons are a little bit far away from the crew members so that stick makes it a little easier for him to access the controls.”

The TMA-05M capsule is scheduled to dock with the Russian-operated Rassvet module on Tuesday at 5:52 GMT.