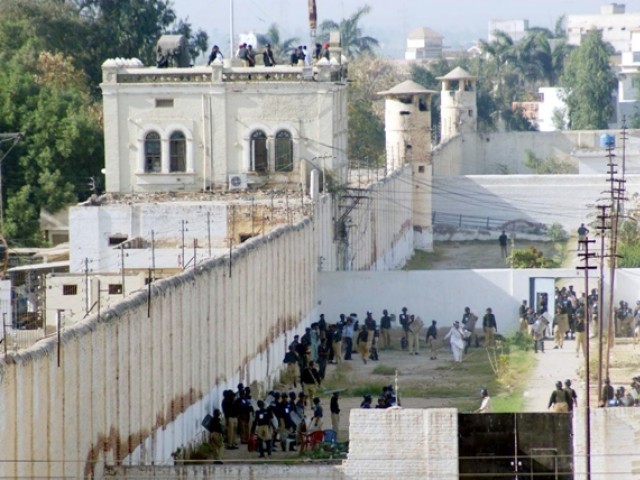 Seven prisoners died and more than 40 inmates and seven policemen were injured during a protest in March, 2011. PHOTO: PPI/FILE

The inmates had taken over the prisoner compound after an argument with jail wardens over more time out of barracks for them.

Prisons DIG Gulzar Channa confirmed that 15 jail wardens had been taken hostage by the prisoners.

Channa said police had resorted to shelling and firing at 11am as there had been a jailbreak attempt. The prisoners’ version could not be obtained as cellphones are not allowed inside.

Two prisoners, identified as Sajid Khaskheli and Karim Bux, were reported to have been killed. Khaskheli was an under trial prisoner. One of the bodies was shifted to Civil hospital.

No operation was launched by security personnel, but the situation was reported to have been contained. No efforts for the recovery of the hostages have been made so far.

Justice Sajjad Ali Shah of the Sindh High Court (SHC) had after an operation at the jail last year ordered that authorities cannot carry out an operation without court permission.

Seven prisoners died and more than 40 inmates and seven policemen were injured in a protest that brewed over a cup of tea at the Hyderabad Central Jail in March, 2011.

Relatives of the inmates who had come visiting also blocked the National Highway in protest.

The total number of prisoners at the jail is 1,800.