NASA Mars images 'next best thing to being there'

NASA Mars images 'next best thing to being there' 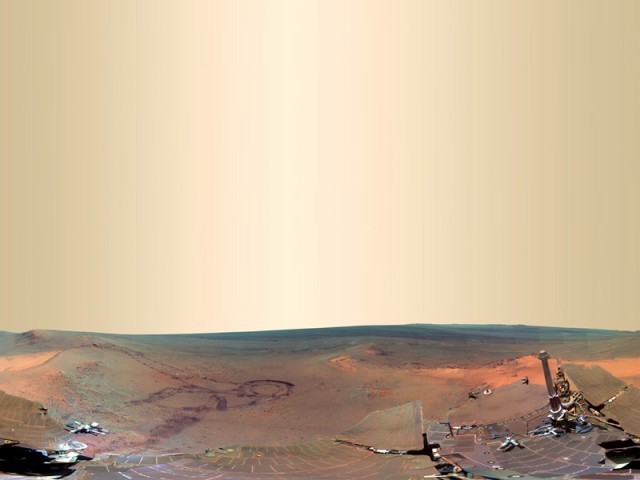 The full-circle scene fuses together 817 images taken by the mast-mounted panoramic camera (Pancam) on the Opportunity. PHOTO: AFP

WASHINGTON: The US space agency NASA has recently pieced together a panoramic view from the camera on NASA’s Mars Exploration Rover Opportunity, calling it the “next best thing to being” on the Red Planet.

The full-circle scene fuses together 817 images taken by the mast-mounted panoramic camera (Pancam) on the Opportunity over a four-month period, showing new rover tracks and an old impact crater.

The panorama — which NASA said in a release was the “next best thing to being there” — includes the rover’s solar arrays and deck in the foreground.

Pancam lead scientist Jim Bell of Arizona State University, Tempe, said the images provide a “spectacularly detailed view of the largest impact crater that we’ve driven to yet with either rover over the course of the mission.”

The panorama was stitched together from component images taken between December 21, 2011, and May 8, 2012, when Opportunity was stationed on an outcrop nicknamed Greeley Haven.

Opportunity completed its 3,000th Martian day on July 2, and the US space agency marked 15 years of robotic presence on the Red Planet.

NASA’s Curiosity rover, formally known as the Mars Science Laboratory but nicknamed a “dream machine” by NASA scientists, blasted off from Florida in November and is expected to land in early August.

The most advanced machine ever built with the aim of roaming the surface of Earth’s nearest neighbor cost $2.5 billion to construct and launch, carries its own rock-analyzing lab and aims to hunt for signs that life once existed there.