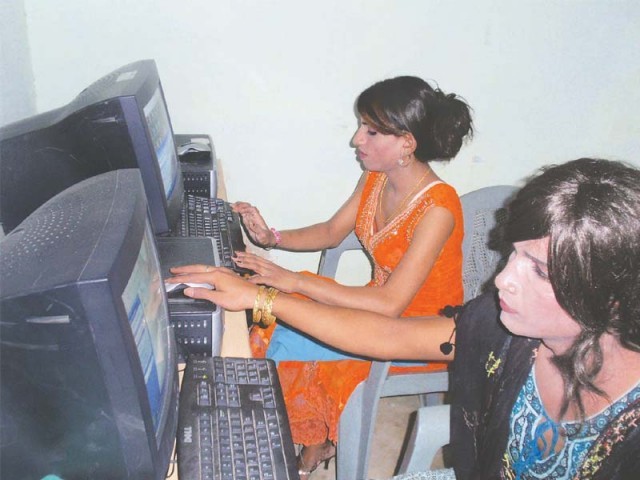 The computer training centre has been set up on a self-help basis. Sanam Fakir runs her eponymous welfare association and is the go-to person for transgender people in Sindh. PHOTO: EXPRESS

SUKKUR: Transgenders will have to learn different skills to be able to earn a respectable livelihood, said Sanam Fakir while speaking at the inauguration of a computer training centre at her house on Thursday.

“We will have to break the begging bowl,” she said. “My mission is to educate transgender people so that they become bread earners for themselves and their dependents. This computer training centre has been set up on a self-help basis.”

Fakir runs the Sanam Fakir Welfare Association and is the go-to person for transgender people in Sindh. The institute aims to provide free computer training in a bid to wean them off begging. Although the Sindh government has appointed her as the focal person for this minority group she is still working without an office and salary.

There have, nonetheless been great developments for transgendered people who were previously denied the right to have a computerised national identity card (CNIC). But the Supreme Court stepped in and changed that, making it possible for them to now be eligible for benefits that other Pakistani citizens could apply for.

Fakir is also counting on the commissioner of Sukkur to keep his promise of granting her some funds for welfare work. The commissioner, Inamullah Dharejo, said that he gave a cheque of Rs200,000 to Fakir for the welfare of the transgenders. Unfortunately, the system changed and the funds were withdrawn. “We will give them funds just as we receive them,” he promised. Fakir is now focusing on the centre where they have three computers and at least 10 students. “We have hired an instructor but he does not come regularly; therefore, I also teach them,” she said. Fakir has matriculated and knows how to operate a computer. At least 10 more students will be trained after this batch is done. Some of them are intermediate students.

Fakir said that she purchased three second hand P-III computers for Rs40,000. “Initially we are teaching our students basics of the computer. We want them to learn how to type in English and Urdu,” she added.

One of the students, Savera, told The Express Tribune that she did intermediate as a private candidate. “It was very difficult to continue studying with boys after I completed eight grade because the boys used to tease me,”

Zahida also wants to learn computer to get a respectable job. “We are also human beings and have right to get education,” she said, “I am grateful to Sanam, who is doing a lot for the welfare of our community,” she added.

Farzana is keen to learn computer and a fast learner at the centre. She is very intelligent and also intends to continue her studies as a private candidate. “We earn enough by performing at functions but people treat us like a commodity,” she said.

Fakir has already requested the National Database and Registration Authority (Nadra) general manager to help them get jobs after the students complete their training. She said that she could send her students to other training centres in the city but so far they can’t afford the fees.