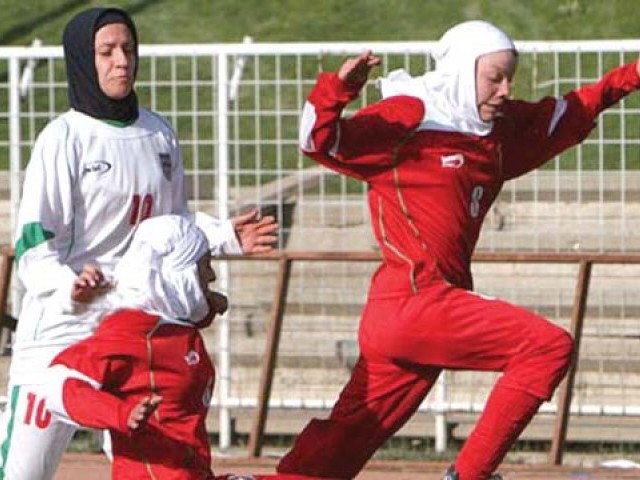 Women football players participate in a match wearing the hijab. FIFA on Thursday overturned a ban on women playing the game with headscarves. PHOTO: FILE

ZURICH / DUBAI: A ban on the use of the Islamic headscarf, or hijab, for Muslim women footballers was lifted by the sport’s rulemakers on Thursday.

The garment had previously been banned due to safety concerns and because it was not recognised in the laws of the game.

The International Football Association Board (IFAB) unanimously overturned the ban and agreed to re-write the laws after studying reports from FIFA’s medical officer.

“Safety and medical issues have been removed for the use of the headscarf and it is approved that players can have the head scarf,” FIFA secretary general Jerome Valcke told reporters.

He said a further meeting in October would discuss the details.

“The only remaining point now is now the colour and design of the headscarf,” he said.

The move came after a campaign in favour of the hijab from FIFA vice-president and executive committee member Prince Ali Bin Al-Hussein of Jordan.

Other sports such as rugby and taekwondo already allow the use of the hijab.

Last year the women’s football team from Iran were prevented from playing their 2012 Olympic second round qualifying match against Jordan because they refused to remove their hijabs before kickoff.

Iran, who had topped their group in the first round of Olympic qualifiers, were punished with an automatic 3-0 defeat, which abruptly ended their dreams of qualifying for the London games.

IFAB, founded in 1886, is football’s ultimate law-making body, comprising four members from FIFA and four from the British associations.

The decision by world footballing authorities to overturn a ban on women football players wearing the Islamic headscarf was welcomed by several Arab states Thursday.

The International Football Association Board (IFAB), custodians of the rules of football, overturned its 2007 ban on the Islamic headscarf, or hijab, which it had argued was unsafe and increased the risk of neck injuries. New designs are secured with Velcro that experts have said eliminate the risk of serious injury.

Critics said the ban promoted inequality at the highest level of the world’s most popular game.

“It brings justice to female players. Its positive impact will be direct on Kuwaiti women’s enthusiasm to play football,” Sabah added.

The Kuwaiti women’s football team, like those of the United Arab Emirates, Qatar and Bahrain, plays in various international competitions.

Oman does not field a women’s team, neither does Saudi Arabia, the most conservative of six monarchies in the Arabian Peninsula.

Riyadh has yet to confirm if it will send any women athletes to compete in the London Olympics, and Saudi officials declined to comment to AFP on FIFA’s scrapping of the hijab ban.

Sabah said FIFA’s decision establishes new “respect for different religions, with the veil ban being until now a barrier for Kuwaiti women”.

Iran was at the forefront of the fight against the veil ban. It had complained to FIFA after its women’s team was banned in June 2011 from playing in a qualifier against Jordan for the London Olympics.

Boon to women’s football in the Gulf

FIFA’s decision is “going to promote women’s sport in Arab and Islamic countries, which have top-notch football players who are unable to compete because of the veil ban”, said Adel Marzouq, coach of the women’s football team from Bahrain.

“This wise decision will encourage footballers to play their chosen sport without embarrassment,” he added.

In the United Arab Emirates, where football is encouraged from an early age, women will from now on have the “chance to practice this sport with religious respect”, said Yussef Abdallah, the head of the country’s football federation.

In neighbouring Qatar, the tiny, gas-rich nation that will host the 2022 World Cup and which encourages women’s sport, the relief was clear.

“The number of women playing football is going to grow, along with the support of families, footballing federations and sporting bodies worried about Muslim identity,” Ballan added.

The wearing of the Islamic veil, limited historically to conservative Gulf monarchies, has gained ground, including in sports, since the 1979 Iranian Revolution and the creation of an Islamic republic.

Use of the veil spread quickly as Islamist movements grew in the wake of last year’s Arab Spring uprisings.