Not a matter of victory or defeat, Pakistan reopens Nato routes

Not a matter of victory or defeat, Pakistan reopens Nato routes 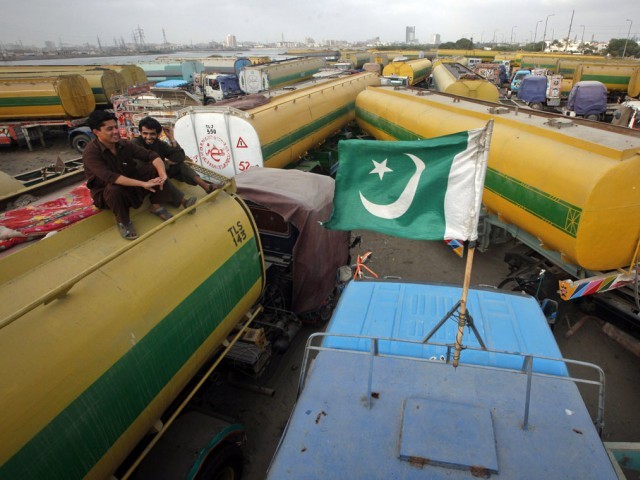 A Pakistan national flag is mounted on the top of a fuel tanker, which was used to carry fuel for NATO forces in Afghanistan, as drivers sit nearby, at a compound in Karachi July 3, 2012. PHOTO: REUTERS

ISLAMABAD: Following an apology from the US secretary of state over November’s cross-border attacks, the Cabinet’s defence committee on Tuesday night announced to reopen route for NATO supplies to Afghanistan.

Briefing newsmen after meeting of Defence Committee of the Cabinet (DCC), Minister for Information and Broadcasting Qamar Zaman Kaira said Pakistan welcomed Secretary Clinton’s apology over the Salala issue. “Today the US showed softness in its stance and accepted our principled stance over the issue. We appreciate this decision which is not anyone’s victory or defeat,” Kaira said.

Kaira said Pakistan decided to cooperate with NATO with a view to maintain peace and stability in Afghanistan.

As was in the past, Pakistan will also not charge transit fee for the supply route, he added.

To a question, he said transit fee is not a financial issue and it has been decided in principle that Pakistan would not charge any fee for NATO supply as it was a matter of national honour and dignity.

“National honour and dignity cannot be measured in terms of money.”

The Information Minister said only necessary items would be allowed inside Afghanistan for NATO, ISAF and Afghan forces.

The Minister said Pakistan closed NATO supply route and got vacated Shamsi airbase after the US attack on Salala check post.

The government negotiated with the US in line with the recommendations of the Parliament, which is reflective of the aspirations of people, he added.

He said Pakistan has made it clear that it will not allow the US to transport lethal weapons to Afghanistan, except those meant for the Afghan security forces.

The Minister reiterated that the drone attacks should be stopped as these are violation of sovereignty of Pakistan and international laws. Responding to a question, he said that talks about stoppage of drone attacks are going on with the US.

Kaira said the US has been told that attacks such as Salala should not happen again and they should respect Pakistan’s sovereignty. The US, he said, has assured Pakistan that there will be no repeat of Salala like incidents in future.

The Information Minister said Pakistan is a responsible nation and wanted to eradicate terrorism from the region , bringing peace and stability in Afghanistan and in the region as well.

A stable and peaceful Afghanistan is in the interest of Pakistan and the region, he added.

To a question, he said, “Pakistan does not want clash with a super power like the US and more than 50 countries of NATO, with whom we have also good relations.”

To another question about Coalition Support Fund (CSF), Kaira said CSF was not assistance to Pakistan, rather it was the amount which the country has already spent on fight against terrorism.

During the DCC meeting, Foreign Minister Hina Rabbani Khar informed about her negotiations with the US administration.

PAC: SC refuses to send registrar for scrutiny of its accounts