Offici­al says some progre­ss has been made on the issue.
By AFP
Published: July 3, 2012
Tweet Email 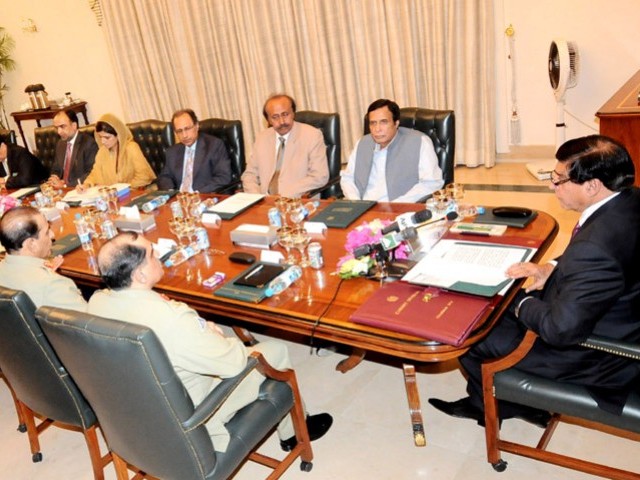 Ashraf made the remarks to Pakistan’s top civilian and military leaders, but his office stopped short of announcing whether the meeting had reached any decision on ending the blockade.

The meeting of Pakistan’s defence committee of the cabinet, chaired by the new prime minister, got underway after officials on both sides said “progress” had been made in crafting a deal to reopen the border.

The prime minister’s office confirmed the meeting was underway. A senior Pakistani government official told AFP the main agenda items were reopening the Nato supply routes and the security situation.

The defence committee groups together the most senior cabinet ministers and military commanders. Pakistan’s army chief, General Ashfaq Kayani, and the head of the ISI intelligence agency, Zaheerul Islam, were among those present.

A deal on reopening of Nato supplies would help repair Pakistani-US relations, which are at their worst since the 9/11 attacks and still reeling from the US raid that killed Osama bin Laden in Pakistan in May 2011.

“You may say some progress has been made, that is why the prime minister has convened the DCC,” a Pakistani official told AFP before the meeting.

But he refused to comment on press reports that a draft understanding had been reached between Pakistan and the United States.

A US official confirmed only that talks were “progressing” on reopening the ground lines of communication (GLOCs) shut on November 26 after US air strikes killed 24 Pakistani soldiers on the Afghan border.

Tuesday’s meeting comes one day after US Deputy Secretary of State Tom Nides and the US commander in Afghanistan, General John Allen, held talks in Islamabad.

It was Allen’s second visit in six days.

US Secretary of State Hillary Clinton also telephoned Prime Minister Ashraf over the weekend, fanning speculation that a deal could be imminent.

But a similar flurry of speculation and a defence committee meeting in May ended in stalemate.

Islamabad has demanded a formal apology for the deaths of its border troops. A US and Nato investigation said the killings were the result of mistakes made on both sides.

Sources familiar with the talks say transit fees for the vehicles is one of the main sticking points.

Islamabad is looking to more than double the payments, which could earn the country up to $1 million a day.

In Washington, the US State Department confirmed only on Monday that talks were ongoing.

“As you know, we’ve been working through a range of issues with Pakistan over the last few months, including towards working on reopening of the GLOCs,” spokeswoman Victoria Nuland said.

“That work continues. We don’t have anything in particular to announce.”

The United States is also understood to have guaranteed payment of at least $1.1 billion should the borders reopen, as compensation for fighting militants, although Pakistan believes it is owed far more, the source added.