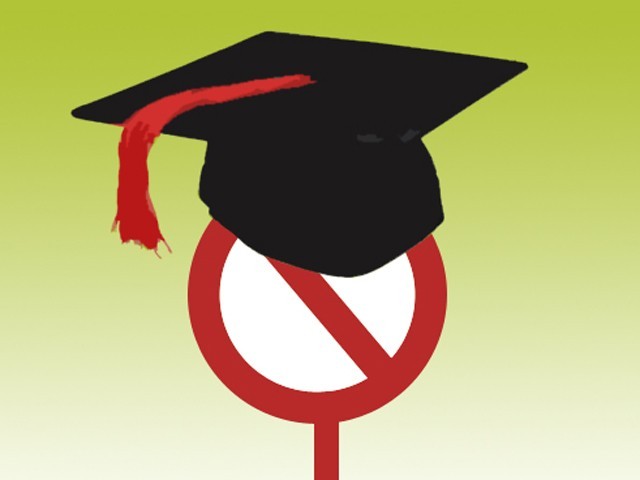 MA (Political Science) degree by the University of Sindh, Jamshoro on May 3, 2003 was declared bogus.

The Azad Jammu and Kashmir (AJK) Accountability Bureau has booked an official of the Mirpur Board of Intermediate and Secondary Board of Education (BISE) for possessing a fake degree.

A spokesperson of the AJK Accountability Bureau on Monday told media that BISE Assistant Controller Examinations Iftikhar Ahmed Khan was issued an MA (Political Science) degree by the University of Sindh, Jamshoro on May 3, 2003. However, upon verification by the AJK Ehtesab Bureau, the varsity declared the degree bogus.

Last year, three employees of the Mirpur BISE Superintendents Ghulam Hussain, Muhammad Nawaz and Private Secretary Muhammad Shoukat challenged Khan’s post in an application filed to the AJK Accountability Bureau. They alleged that they had been serving in the institution for over 32 years and met the qualification criteria for promotion.

However, Khan, a superintendant in BISE holding a BA degree (third division) had been promoted to the post of Assistant Controller on the basic pay scale of B-17 on basis of producing a suspicious MA Political Science degree, under the quota system.

The complainants dubbed Iftikhar’s promotion “as against rules” as well as the decision of AJK High Court. Furthermore, they asserted that his appointment was in violation to the calendar of the AJK BISE.

They also pointed out that the matter was brought in to the notice of the Chairman of the AJK BISE, through various applications with request to probe in to the ‘unlawful’ promotion of the official through a fake degree, besides the request for getting verified the MA (Political Science) degree of the official, but no action was initiated by the chairman to this end.

The AJK Accountability Bureau spokesman said that an investigation was conducted on the orders of the chairman and resultantly Iftikhar’s post-graduation degree was declared bogus by the concerned university.

Further investigations are in progress against the official for getting promotion and causing loss to the national exchequer through drawing the salary of the post.