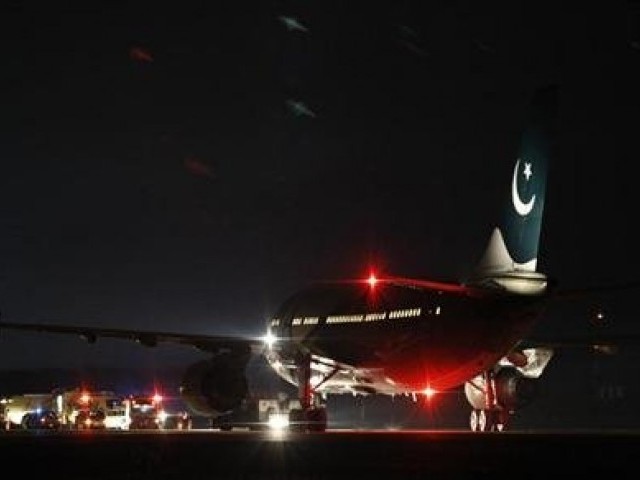 Flight to Islamabad lands back in Karachi due to turbulent weather conditions. PHOTO: REUTERS/ FILE

KARACHI: With the monsoon season approaching and bad weather creating difficult flying conditions, airlines will need to perfect their systems of managing delays and re-routing of flights.

The Pakistan Internationals Airline (PIA) flight PK 370 from Karachi to Islamabad took off without a hitch at 7pm on Thursday, but as it approached Islamabad, conditions became difficult to land and the plane experienced significant turbulence which prompted the pilots to divert the flight to Lahore. Unfortunately, the conditions in Lahore were not any better and the pilots decided to again take the next safest option- land back in Karachi.

Once back in Karachi, the passengers were offloaded and asked to report to a counter where they would be accommodated because their flight had been cancelled.

According to a senior PIA official, the protocol in this scenario is straight forward.

“Passengers whose flight has been cancelled are put on the next available one and that is our responsibility. We accommodate every single passenger.”

The official, who preferred to remain anonymous, added that if there was not enough room on a previously booked flight, they would provide a bigger plane to seat the passengers from a cancelled flight. But the passengers of PK 370 found the solution to be not so straight forward.

Some passengers were given tickets for flight PK 368 departing at 10am on Friday morning but when they arrived at the counter, they found a mob already at the counter. People were being told that the flight had no more available seats and that those available would be allotted on a first-come-first-serve basis.

Air traffic officials reportedly told the passengers that the flight had been overbooked by 55 seats whereas members of the reservations staff told them it wasn’t so. Some passengers were even told to pay the fare difference in case the seats available were of a different class.

“We adjust passengers on a priority basis and some passengers don’t take the next offered flight because they say they had to go on a different day while some say that they will now go two days later,” the PIA official told The Express Tribune. “If someone has an economy ticket, we can adjust them in economy plus but this doesn’t apply to business class.”

Chances are that when flights are fully booked there are going to be some passengers who will be left stranded waiting for the next flight. PIA does provide a hotel stay for passengers who have to stay overnight but as a passenger stated, getting to a counter on a first-come-first-serve basis requires them to make repeated trips to the airport.

“PIA does not compromise on safety and weather is the first thing to be taken into consideration always,” said the official. “We try and get the passengers on the next available flight and that is the best we can do.”