Eight killed, 30 injure­d in blast on bus in the Hazarg­anji area of Quetta.
By Web Desk
Published: June 28, 2012
Tweet Email 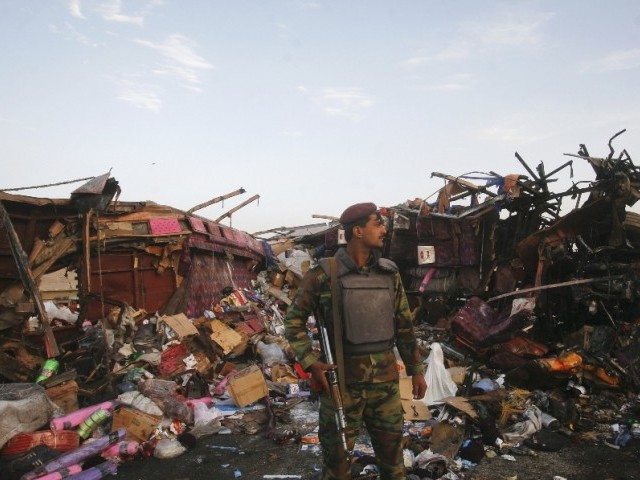 A paramilitary soldier stands guard near a damaged bus destroyed in a bomb attack in the outskirts of Quetta June 28, 2012. PHOTO: REUTERS

QUETTA: A blast in the Hazarganji area of Quetta targeted a bus carrying Shia pilgrims from Taftan to the provincial capital on Thursday, Express News reported. 14 people were killed and 30 were injured as a result of the blast.

Eyewitnesses said that the bus was carrying pilgrims from Taftan and it was targeted when it was passing near a fruit market in the Hazarganji area. Around 15-20kg explosives were used in the blast. A woman and a policeman are also among the dead.

Some eyewitnesses have also claimed that the blast was a suicide attack, officials have not confirmed this as yet.

Initial reports also state that four policemen on the mobile were injured after the blast.

There is no confirmation on the nature of the blast as yet.

It has also been reported that the bus was destroyed as a result of the blast.

The injured were shifted to Civil hospital and Bolan Medical Complex.

Correction: An earlier version of this article had incorrectly mentioned the location of Taftan. The correction has been made.