Militant relief: undercover, but not out of sight

Militant relief: undercover, but not out of sight 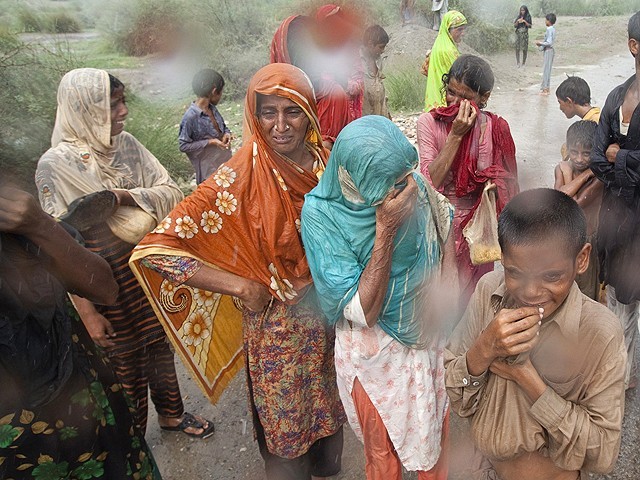 Flood victims weep with their children after having rice, donated by passing vehicles. PHOTO: REUTERS

KARACHI: It has been at least two years since the government banned certain militant organisations but they are still operating undercover and have resurfaced to help flood survivors. This phenomenon is reminiscent of the time of the 2005 earthquake when these groups often displayed more organisation, discipline and resources than the government itself.

These organisations, such as Jamaat-ud-Dawa (JuD), Sipah-e-Sahaba, Jaish-e-Muhammad, Lashkar-e-Taiba, Harkatul Jihad al-Islami, Harkatul Mujahideen, Hizbut Tahrir and Lashkar-e-Jhangvi have set up camps in different parts of Karachi. Their office-bearers claim that the ban has compelled them to work under different names.

Millions of rupees have so far been collected for the survivors of the floods, they said, adding that they are also engaged in relief and rescue operations in the affected areas. They have given food, rations and medical facilities to the survivors as well.

“JuD, under the name of Falah Insaniat Foundation Pakistan, has set up around 29 relief camps at Khalid Bin Waleed Road, Gulshan-e-Iqbal, Gulstan-e-Jauhar, Landhi, Clifton, Korangi and other areas,” an office-bearer of the organisation told The Express Tribune.

Initially, the JuD set up its camp under its original name but the police started demanding extortion money, said Hussain, who is in charge of the camp outside Jamia Masjid Khalid Bin Waleed Road in PECHS Block 2.

“[The police says that since] we are a terrorist organisation, we have to give them a share of our earnings,” said Hussain. “When we tried to explain that this is charitable work, they started demolishing our camps, saying that we were banned organisations.”

Amir or chief of the JuD Karachi division, Naveed Qamar, believes that the organisation was banned to appease the US and its allies, for otherwise they have “nothing to do with terrorism”. He maintained that the JuD runs a large network of Islamic schools and clinics and is engaged in welfare activities, such as disaster relief.

“We provide cooked food to 50,000 flood survivors in all four provinces every day and very soon we will reach out to 100,000 survivors,” said Qamar. The organisation claims to have distributed ration packets to around 8,000 families as well. Each packet costs around Rs3,200 and has ghee, rice, pulses, soap and other items.

They have set up 17 medical camps in Muzaffargarh, Mardan, Mianwali, Kot Addu and Sukkur and 25 of their ambulances are taking patients to hospitals on a regular basis.

“Our main objective is to serve humanity and Islam and we will continue to serve even if our name is not publicised,” Qamar said.

The police have always been aware of the presence of such networks in Karachi because of their robust intelligence web. Jamshed TPO Amir Farooqui confirmed that they have received information from the intelligence agencies that a few suspicious organisations were working in his area. “We are monitoring their activities and investigating their links with banned militant organisations before taking action against them,” he said.

Meanwhile, special secretary for the Home department Collin Kamran Dost told The Express Tribune that since the government cannot deal with this calamity alone, there is nothing wrong if these organisations are working for the relief of the survivors.

“Our agencies are vigilant,” he claimed, adding, “the organisations are not doing any anti-state or terrorist activities, but are in fact serving humanity, which is needed in the present situation”.

The JuD was banned when the US, India and the United Nations accused it of being linked to the Lashkar-e-Taiba, which is accused of being responsible for the Mumbai attacks in December 2008 that killed 166 people.

The Pakistani government therefore sealed all JuD offices in different provinces and arrested its office bearers, including its leader Hafiz Saeed. All assets of the JuD were frozen.

Saeed, the 60-year-old former lecturer for Islamic Studies, was placed under house arrest, but was set free by the Lahore High Court in June 2009 as there was no evidence against him. The only surviving gunman of the Mumbai attacks, Ajmal Kasab, who allegedly has links with Laskhar-e-Taiba, is in Indian custody.