Public-private partnership: ‘Is education a public right or a commodity?’

Public-private partnership: ‘Is education a public right or a commodity?’ 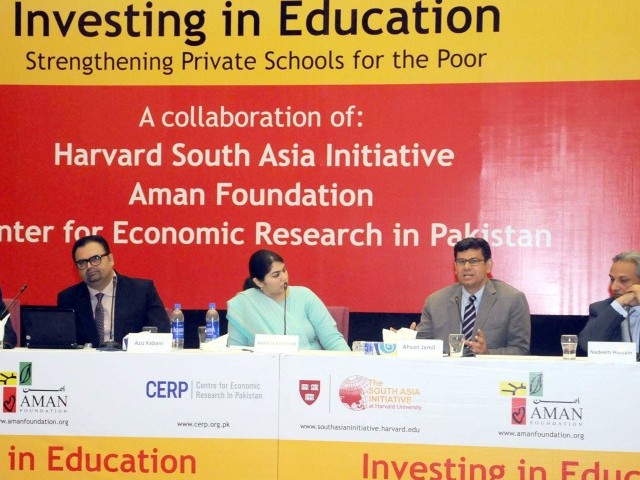 The panelists also presented details about their collaborative project on low-cost private schools for poor students during the seminar. PHOTO: EXPRESS/MOHAMMAD AZEEM

Even though the state is responsible for providing education to children from five years of age to 16 years, is education a public right or a commodity? Educational experts debated the issue as they took part in a seminar organised by the South Asia Initiative at Harvard University, Center for Economic Research in Pakistan (CERP) and the Aman Foundation at the Institute of Business Administration on Tuesday.

The panelists also presented details about their collaborative project on low-cost private schools for poor students during the seminar.

CERP’s Prof. Asim Ijaz Khwaja, who is also associated with the South Asia Initiative, explained that the education programme would offer financial and managerial support to entrepreneurs who own small private schools. “The programme will start as a pilot project in 1,000 schools, with nearly 200,000 students, in 300 villages in northern and southern districts of Punjab.”

Khawaja said that the collaborative effort is based on results of a study conducted by the Learning and Educational Achievement in Punjab Schools (LEAPS) Project, which showed that low cost private schools had outperformed government educational institutions. The project partners would then analyse the programme after a year, and then decide if it could be started in Khyber Pakhtunkhwa and Sindh or not.

Sindh Education Foundation director Aziz Kabani, however, warned of the creeping in of commercial interests wherever the private sector became involved. “I am not a proponent of private schooling. When social services, which are basic human rights, get privatised, they turn into commodities.”

Kabani said that an increase in the number of private schools, even if it provided positive results, was not the solution to the educational dilemma. “This will create further divide in society, as the government, and not nongovernmental and civil society organisations, is responsible for providing education services.”

Prof. Khwaja agreed with the need to incentivise parents to send their children to schools. However, it would not address the principal issue at hand. “Children [mainly] do not attend schools either because their parents do not understand the importance of education, or they do not have the necessary resources.”

Aman Foundation CEO Ahsan Jamil pointed out the benefits for micro financiers if they lent money to entrepreneurs, who would then invest it in the education sector. Tameer Microfinance Bank Limited president Nadeem Hussain, and Teach for Pakistan’s Khadija Bakhtiar were also present on the occasion.