The bodies have not been found, but intell­igence interc­epts indica­ted that they had been killed.
By AFP
Published: June 25, 2012
Tweet Email 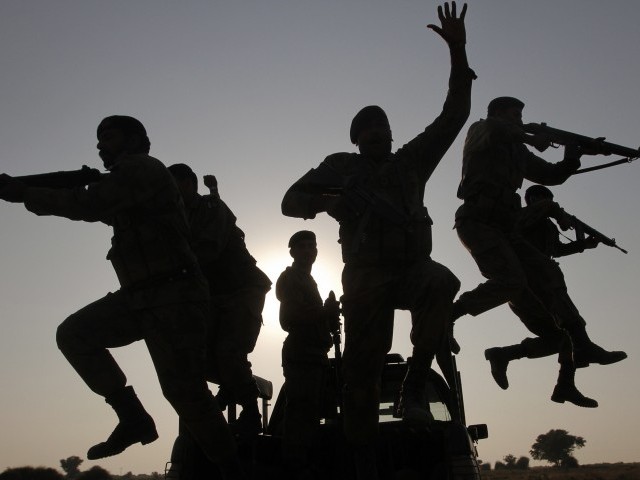 The military said 11 soldiers had also gone missing, "out of whom seven soldiers have been reportedly killed and then beheaded". PHOTO: REUTERS/ FILE

PESHAWAR: Pakistan said Monday that seven soldiers were beheaded by militants who infiltrated from Afghanistan, lashing out at Kabul over cross-border attacks.

The protests come with Pakistan under growing US pressure to act against al Qaeda-linked safe havens on its own soil and the anti-terror Islamabad-Washington alliance at its lowest ebb since the 9/11 attacks.

Pakistan already reported that six soldiers were killed in gunbattles with militants Sunday who crossed from Afghanistan into the northwestern district of Upper Dir, a key border transit route that neighbours the Swat valley where Pakistan defeated a local Taliban insurgency in 2009.

Intelligence officials blamed the attack on loyalists of Pakistani cleric Maulana Fazlullah, who fled to Afghanistan after losing control of Swat to the army.

But on Monday, the military said 11 soldiers had also gone missing, “out of whom seven soldiers have been reportedly killed and then beheaded”.

The bodies have not been found, but intelligence intercepts indicated that they had been killed, a senior military official told AFP in the northwest.

The army said more than 100 militants “from a safe haven across the border” attacked troops on patrol. It claimed to have killed 14 militants.

The army “has strongly protested with their counterparts across the border for not taking action against miscreants present in safe haven in Afghanistan,” a military official said.

Pakistan’s new prime minister on Monday also condemned the attacks and said he would discuss the matter with President Hamid Karzai.

“Pakistan has strongly protested with Afghanistan on the cross-border attacks and I will also take up this issue with Karzai,” Raja Pervez Ashraf told reporters in Karachi.

His office, however, did not elaborate on when such a conversation might take place.

Pakistani troops have been bogged down for years fighting local Taliban but have resisted US pressure to carry out a sweeping offensive against Afghan Taliban fighters in its North Waziristan tribal area.

US Defense Secretary Leon Panetta warned Islamabad earlier this month that Washington was running out of patience over terror safe havens.

Islamabad imposed a blockade, now in its seventh month, on overland NATO supplies into Afghanistan since US air strikes killed 24 Pakistani soldiers along the Afghan border on November 26.

Pakistan was the Taliban’s chief backer when the militia was in power, and is accused by both Kabul and Washington of continuing to play a double game in supporting the insurgency despite its official US alliance.

Pakistanis have sought to deflect some of pressure, by saying the country has suffered more than any other from terrorism, and accuse Kabul and Washington of trying to find a scapegoat for the 10-year war in Afghanistan.

Afghanistan and Pakistan have long blamed each other for Taliban violence plaguing both sides of their porous, mountainous border.