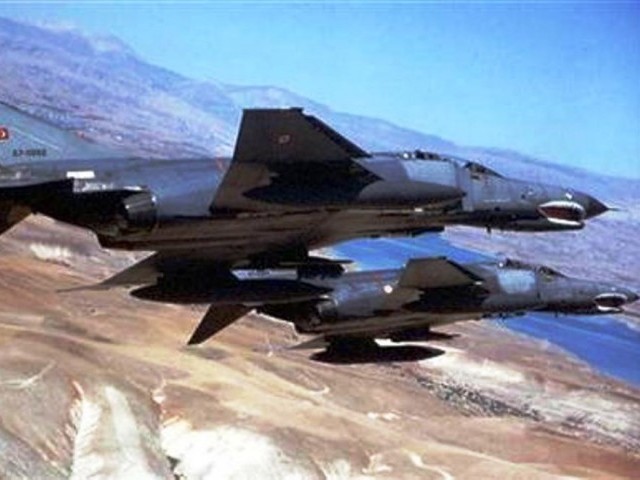 The two middle eastern neighbours are at bitter odds over the revolt against Syrian President Bashar al Assad. PHOTO: REUTERS

Turkey, which had drawn close to Syria before the uprising against Assad, became one of the Syrian leader’s fiercest critics when he responded violently to pro-democracy protests inspired by popular upheavals elsewhere in the Arab world.

Ankara has previously floated the possibility of setting up some kind of safe haven or humanitarian corridor inside Syria, which would entail military intervention, but has said it would undertake no such action without UN Security Council approval.

Turkey said it had lost contact with one of its military aircraft off its southeastern coast, and a television station said it had crashed in Syrian territorial waters.

CNN Turk television said Turkey was in contact with the Syrian authorities to get permission to conduct a search for the airmen, although there was no immediate official confirmation.

Turkey’s military said a search and rescue operation was under way. It lost radar and radio contact with the plane after it left Erhac airport in the eastern province of Malatya.

Hurriyet daily newspaper reported that the plane had gone down in international waters and that the two airmen had been found alive and well by Turkish forces.

Violence in Syria raged on unabated.

The violence, which followed a day of bloodshed across Syria in which 125 deaths were reported, is further evidence of a slide towards sectarian-tinged civil war in a country where majority Sunnis are spearheading an anti-Assad revolt.

Russian Foreign Minister Sergei Lavrov said after talks with his Syrian counterpart that he had urged Syria to “do a lot more” to implement Annan’s UN-backed proposals, but that foreign countries must also press rebels to stop the violence.

Hundreds of people have been killed in Syria since the UN-Arab League mediator announced his six-point plan on April 12 and there was no let-up in the violence on Friday.

US looking forward to working with Raja Pervez Ashraf