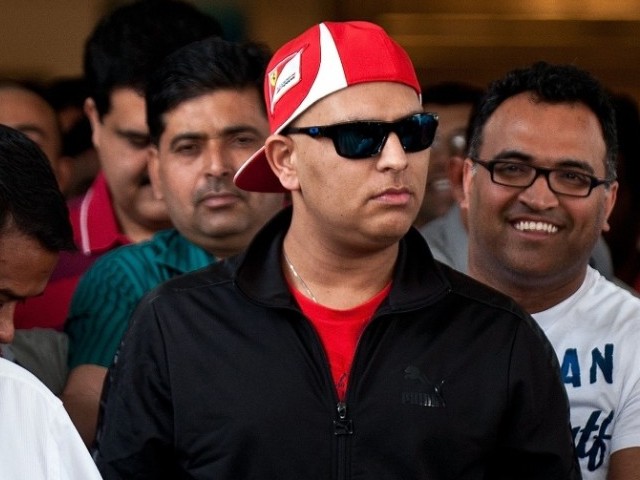 The 30-year-old was diagnosed with a rare germ-cell tumour between his lungs early last year. PHOTO: AFP/ FILE

NEW DELHI: India’s explosive all-rounder Yuvraj Singh has said he is back in light training after undergoing cancer treatment and hopes to play in the World Twenty20 starting in September in Sri Lanka.

The 30-year-old, who was diagnosed with a rare germ-cell tumour between his lungs early last year, said he was regaining energy after finishing chemotherapy in the United States two months ago.

“I think favourites (for the World T20) are India because we’ve got the biggest hitters… Hopefully I should be back by then,” he told the ICC’s Cricket 360 television show in an interview to be released on Thursday.

“I’ve done six or seven sessions very light training and very light yoga,” he said. “I’m just getting back into the groove of being a normal person.”

Yuvraj played a key role in India’s 50-over World Cup triumph last year, scoring 362 runs with his aggressive batting and taking 15 wickets in nine matches — performances that saw him named man of the tournament.

But he has not played competitive cricket since two home Tests against the West Indies in November, and he stressed that he had not set himself a deadline for his return.

“I can’t really give a timeframe but I have to see how my body is recovering and how fast I can come on the field… I don’t want to rush and I don’t want to come back at 75 percent fitness,” he said.

“I might take six months, I might take two months. So I don’t know. But the day I feel 100 percent I surely will be back.”

Yuvraj, who made his international debut in 2000, impressed with his big hitting in the inaugural World Twenty20 tournament in South Africa in 2007, when he smashed England paceman Stuart Broad for six sixes in an over.

His cancer diagnosis last year shocked India’s huge cricket fanbase and drew messages of support from fellow players and followers around the world.

“It took a long time to sink in but eventually I made peace with it,” he said.

“The support was overwhelming, especially from India… I went through chemotherapy which is hard for everybody but the wishes and the love is what made me come back.”

He added that he had posted updates and pictures on Twitter during his treatment to spread the message to other cancer sufferers that they “can also fight it with the support of their family and their loved ones”.

Salman Butt to be freed: Father