Khumariyaan: The sound of intoxication

Khumariyaan: The sound of intoxication 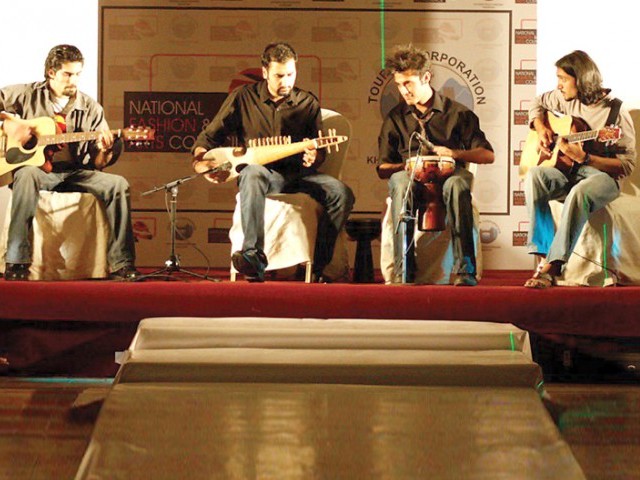 Khumariyaan has become a popular name in the Islamabad, Lahore and Peshawar circuit because of their experimental approach towards music. PHOTO: PUBLICITY

When you run a search for ‘Khumariyaan’ on Facebook’s search tab, images of whiskey bottles will pop up. This is because the Pashto word khumariyan in English translates to intoxicants. But if you look a little harder online for the page dedicated to the Peshawar-based instrumental band Khumariyaan, their smooth blend of the rabab and keyboards with a dash of the guitar will send you in a trance. They could very well be the next big musical sensation in Khyber-Pakhtunkhwa.

The band comprises Farhan Ali Bogra on the rabab, Sparlay Rawail on lead guitars, Aamer Shafiq on rhythm guitars, Hammad Baig on the keyboard and backing vocals and Shiraz Khan on percussions.

Like other Peshawar musicians, two band members, Shafiq and Khan, are slightly overqualified to be obscure underground musicians. Both members have a double Masters degree in subjects ranging from International Relations to Economics, which makes one wonder why these young men opted for a line of work that is not relevant to their educational background.“Studies are obviously a priority but we also wanted to promote the rabab simultaneously. So we forayed into music,” says Khan.

“Bogra, however, has a deeper sentimental value attached to the rabab,” his band members told The Express Tribune. The story traces back to his childhood when his friend’s father threw away his son’s rabab because he thought it was the instrument of “uncivilised people”. When his friend protested for days, the father bought him a guitar because it’s stereotyped as a “classy instrument”. This episode impacted Bogra’s life and inspired him to pick up the rabab and promote it through his band’s philosophy.

Despite their busy schedules, the band has become a popular name in the Islamabad, Lahore and Peshawar circuit because of their experimental approach towards music. “Since there isn’t a proper underground scene in Peshawar, everyone is a Joe Satriani within the four walls of their house. That is how music spreads in this region,” Shafiq quips.

Khumariyaan has performed at the Lahore University of Management Sciences (LUMS) Olympiad and also at a recently-held fashion show in Lahore. “We have kept our sound raw and simple,” says Khan. “And since we are more known for our live acts, we focus on performance and tend to incorporate the essence of that place in our music,” he adds.

Like most underground bands of Peshawar, Khumariyaan has a larger following outside the city. But they still believe that the “rabab effect” has helped them penetrate into the market of traditional music-listeners quickly. “The fact that our band’s music is like the sound of the soil packaged in a new way is what urges people to listen to us,” says Shafiq.

What upsets the band is the intolerance displayed by the audience of K-P every now and then. “The way you interact with people matters a lot in Peshawar,” says Shafiq.” You have to be humble with them because if you try to act like a rock star they won’t think twice before disowning you,” the band members say.

A long way to go

Despite some well-received live performance such as “Sheenai”, “Qataghani”, “Bela”, “Tamasha” and “Sakal”, the band is yet to come out of the underground limbo and make a mark in the mainstream music industry. Even though the band has lyrics and tunes waiting to be recorded; they still give a break of three to four months between each video release. But from the kind of response their videos get, it seems like the audience is convinced that Khumariyaan’s projects are worth the wait.

The band members believe that, “If we manage to make the audience forget their worries for a few minutes the point of forming Khumariyaan would be fulfilled.” The band seems extremely gung-ho about their aim which to a third person seems slightly far-fetched amidst the political and social turmoil.

Is Asim Jofa talking about you?