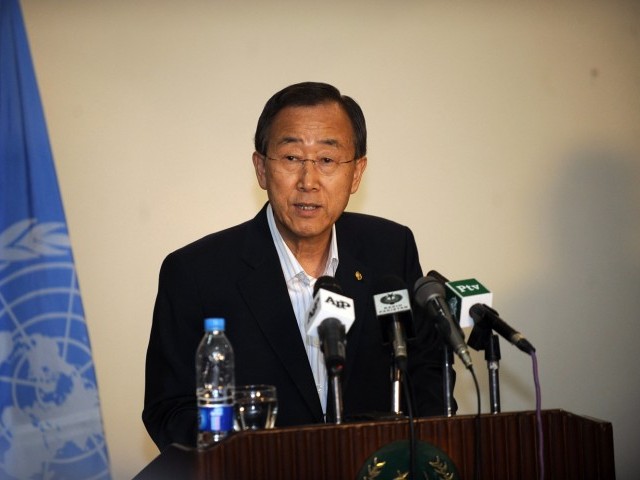 UN Secretary General Ban Ki-moon on Sunday Ban announced $10 million from the UN central emergency response fund, making a total of $27 million since the beginning of the crisis and said “as the waters recede, we must move quickly”.

Ban pledged to speed up international aid for as many as 20 million people hit by floods, warning that the country’s worst humanitarian crisis was far from over.

Ban Ki-moon held talks with leaders and flew with President Asif Ali Zardari over some of the worst affected areas of central province Punjab.

“I’m here to urge the world to step up their generous support for Pakistan,” Ban told a joint news conference, with Zardari saying he would never forget “heart wrenching” scenes of destruction he had witnessed.

Charities have complained that relief for those affected by the worst natural disaster in Pakistan’s history was lagging far behind what was needed, with six to eight million dependent on humanitarian aid to survive.

The UN secretary general said a possible 20 million, or one in 10 Pakistanis were directly or indirectly affected by the disaster and that one fifth of the country was ravaged by floods.

“This disaster is far from over. The rains are still falling and could continue for weeks.

Ban said he would report back to the UN General Assembly on Thursday and discussions would continue on how to provide funds beyond the 460 million earmarked for an initial 90 days.

During the meeting, Prime Minister Gilani reiterated the need for foreign assistance for rehabilitation of flood victims. He said shelter tents and medicines are required on an urgent basis. The prime minister affirmed that rehabilitation is the highest priority of the government at the time.

The UN chief will visit areas devastated by the country’s worst floods in history and will hold talks on relief efforts.

He was earlier greeted by Foreign Minister Shah Mahmood Qureshi at Chaklala Airbase. Ban told reporters that he was in Pakistan to share the “sympathy and solidarity” of the United Nations with the people and government of Pakistan and “to see what more needs to be done”.

“I’m here also to urge the world community to speed up their assistance to the Pakistani people,” he said.

“We will try to mobilise all necessary assistance and remember that the whole world is behind the people of Pakistan in this time of trial.”