Aung could not travel to Oslo since she spent 15 years under house arrest in Myanma­r.
By Reuters
Published: June 16, 2012
Tweet Email 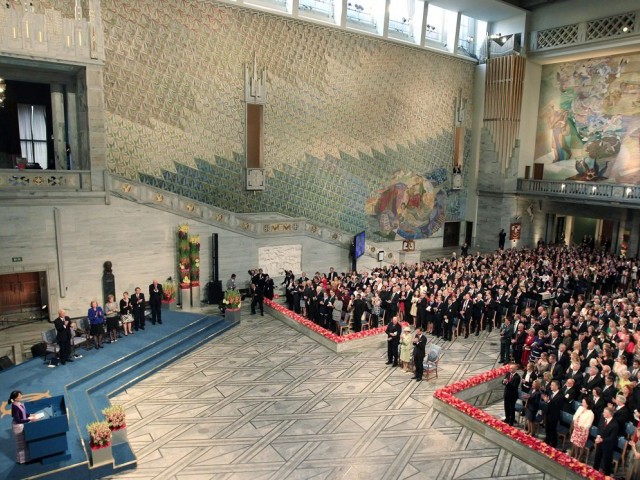 OSLO: Myanmar opposition leader Aung San Suu Kyi finally accepted her 1991 Nobel Peace Prize in Oslo on Saturday after spending a total of 15 years under house arrest and said full political freedom in her country was still a long way off.

“Absolute peace in our world is an unattainable goal,” Suu Kyi said in her acceptance speech during her first trip to Europe in nearly 25 years.

“Hostilities have not ceased in the far north; to the west, communal violence resulting in arson and murder were taking place just several days before I started out the journey that has brought me here today.”

“There still remain such prisoners in Burma. It is to be feared that because the best known detainees have been released, the remainder, the unknown ones, will be forgotten,” Suu Kyi, 66, told a packed Oslo City Hall.

A day earlier, she arrived from Switzerland to a jubilant reception as dancing and chanting crowds filled Oslo’s streets and showered her with flowers.

Suu Kyi, who spent a total of 15 years under house arrest between 1989 and her release in late 2010, never left Myanmar even during brief periods of freedom after 1989, afraid the military would not let back in.

Her sons, Kim and Alexander had accepted the Nobel prize on her behalf in 1991, with her husband Michael Aris also attending the ceremony. A year later Suu Kyi announced she would use the $1.3 million prize money to establish a health and education trust for Burmese people.

She was unable to be with Aris, an Oxford academic, when he was diagnosed with prostate cancer and died in Britain in 1999.

Suu Kyi, who was elected to parliament in April, thanked Norway – a tiny Nordic nation of just 5 million people – for its support and the instrumental role it played in Myanmar’s transformation.

In 1990, the Bergen-based Rafto Foundation awarded its annual prize to Suu Kyi, a little-known activist at the time, after a Norwegian aid worker in South-East Asia highlighted her work.

The award provided lasting publicity for her non-violent struggle against the country’s military junta, putting her in the international spotlight and setting the stage a year later for the Nobel Peace Prize.

Norway has also provided a home to the Democratic Voice of Burma, an opposition television and radio outlet, which broadcasts uncensored news into Myanmar, in much the same way Radio Free Europe did behind the Iron Curtain decades earlier.

During her acceptance speech, Suu Kyi skirted the issue of sectarian violence between Rakhine Buddhists and stateless Muslim Rohingyas, which has tested Myanmar’s 15-month-old government.

“We hope ceasefire agreements will lead to political settlements founded on the aspirations of the people, and the spirit of union,” she said.

The violence, which displaced 30,000 people and killed 29 by government accounts, stems from an entrenched, long-standing distrust of around 800,000 Muslim Rohingyas, who do not even hold citizenship, and much of Myanmar’s public regards them as illegal immigrants.

The crisis has also put President Thein Sein in a tight spot. His government is under pressure from rights groups and Western countries to show compassion towards the Rohingyas but a policy shift risks angering the public.