KMC will hold a compet­ition in school­s for naming the two Pumas.
By Shaheryar Mirza
Published: June 15, 2012
Tweet Email 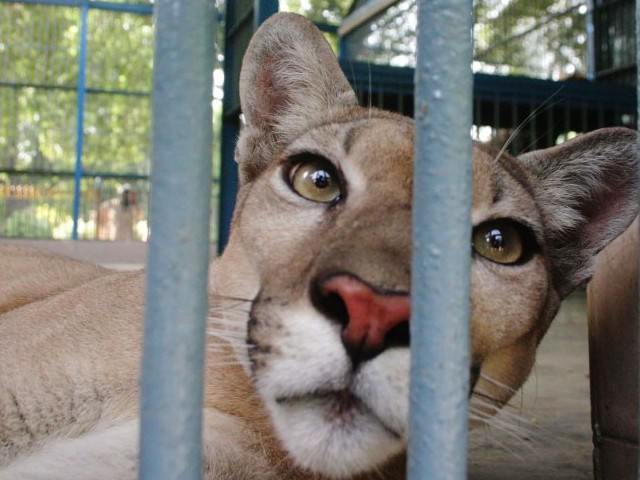 Puma's for the Safari Park were given temporary quarters at the Karachi Zoological Gardens on Thursday. PHOTO: PPI

Four new animals — a hippopotamus, an African lion, a Bengal tiger and a white lion — will be arriving at the zoo within the next few months, but most of them will be moved to Safari Park once their enclosures are completed.

“We will be getting a white lion from France, a tiger and a hippopotamus from South Africa,” said Karachi Metropolitan Corporation (KMC) Administrator Mohammad Hussain Syed while talking to the newsmen at the Karachi Zoological Garden. “Every few months you will be seeing an increase in animals in Karachi’s zoos.”

Half the year has already passed by. In March, the KMC had claimed that they will be getting 17 new species, making the total number of animals 48 by the end of this year. Two Pumas (Puma Concolor) from Canada are the latest acquisitions by the zoo. The pair of 4.5-year-old pumas cost Rs2.1 million. They were unveiled at a ceremony held at the zoo today. A competition will be held in schools across the city for naming the animals.

The former director of the zoological garden, Bashir Khan Saddozai, who is now the director of Safari Park, said that the park will get five animals this year for sure. “Except for the white lion, all of the animals, including the hippopotamus, bengal tiger, the pair of pumas and the African lion, will be moved to ‘cages’ in Safari Park.”

Generally “safari” denotes an area where animals can be observed in their natural habitat, or are at least free to roam about and visitors drive through. But Karachi’s Safari Park may stray from this definition.

“These animals are going to be in cages and the actual safari is a separate matter,” Saddozai said, when asked why the pumas, lions and tigers will all be in cages.

The KMC also said that an aviary will also be ready in Safari Park within three months.

In that aviary “the birds will have enough space to fly freely”.

But not all of them will be brought in this year. “It is hard to get so many animals because the cash flow and the budget is limited,” explained Saddozai.

Standing by the court: Babar Awan says he has been getting death threats but won’t flee