"It will appear as though it is plante­d… it is, but it should­n’t appear it is” says Meher Bukhar­i.
By Shaheryar Popalzai
Published: June 14, 2012
Tweet Email 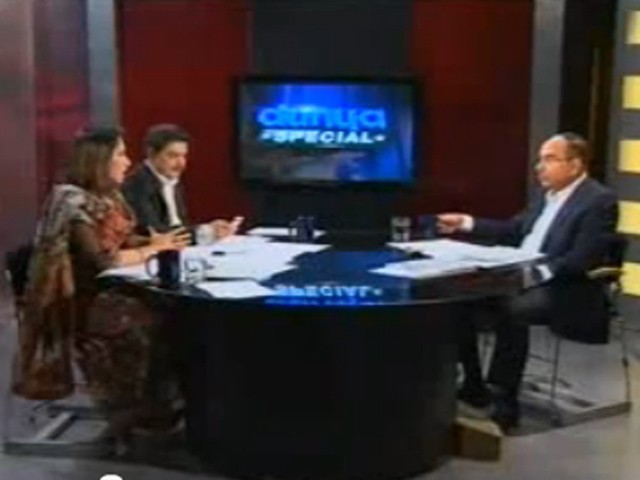 "It will appear as though it is plante­d… it is, but it should­n’t appear it is” says Meher Bokhar­i.

What do you get when you leave the camera on with two TV anchors and a business tycoon during an advertisement break? A candid video of what went on behind the scenes during what is termed a “planted show” on one of the biggest scandals in Pakistan’s history.

Behind the scenes footage showing Dunya News anchors Mubashir Lucman and Meher Bokhari talking to Malik Riaz during their show surfaced on YouTube under the title “Malik Riaz Planted Interview with Mehar Bokhari and Mubashir Lukman on dunya tv” on Thursday. The show aired on the TV channel on Wednesday.

The footage shows conversations between Lucman, Bokhari and Riaz focused on the kind of questions they will be asking. Both anchors are also instructed against interrupting Riaz during the interview.

Bokhari is heard saying a question is planted towards the end of the video.

“Say what you want… what question should we ask. It will appear as though it is planted… it is, but it shouldn’t appear it is.”

The video begins with general conversation and is followed by Riaz questioning the anchors on why they are not asking why he is part of “deals”.

Lucman is then seen on the phone asking if the interview is going fine and defending himself by saying Riaz is being given a chance.

Who is he speaking to? Abdul Qadir Gilani, he says.

The anchor tells “Gilani” that he wants to clear his name from taking money and he wants to talk about Hamid Mir’s allegations, but Riaz isn’t letting him take his name. “No, no,” says the business tycoon in response to that.

Riaz then asks “Gilani” to pray for him.

In between Lucman’s smoke break, Bokhari turns to Riaz to discuss what they will ask next. A brief discussion and a “khul kay poochain”, Meher says that they will discuss journalists at the end of the show, so as to “clear her name” at least.

Lucman tells Riaz, “Today I will ask you to give me in front of everyone. Give me a villa like you gave Hamid”. “No, no,” is Riaz’s response once again, followed by a “why not” from Lucman.

Yet another break later, both anchors and Riaz are once again seen talking about what the next discussion will be.

Riaz once again mentions that he wants them to ask why he is in every deal, and is told by Bokhari that she is not interested in asking that question, but is in return told that he wants to go back to it. “So go back,” says Lucman.

Riaz is seen occasionally choosing topics of his choice, focusing on the chief justice as well. He is also visibly upset during one part of the video, where he says that most of his questions are left and the work isn’t done.

Smoke breaks, thumbs up from both anchors, a high five and questions of how the show is going so far are also seen during the video.

Little arguments between both anchors are also regularly seen during the video, mostly on order of asking questions and the time each has to take.

Lucman also tells Riaz that he will ask a “conspiracy theory” question that he wanted to become the prime minister.

He tells Riaz that he will not answer the question before 10, as this will make people wait for it otherwise they won’t come back to the show.

In another interesting revelation, Riaz states that he does not eat roti, chawal or meetha, and will eat an egg or chicken. Lucman asks Bokhari to get barbecue instead.

Riaz is not to be interrupted

The second part of the video has strict instructions coming in for both Lucman and Bokhari that Riaz is not to be interrupted.

Both anchors give their assurance that they will not be interrupting the businessman now. Lucman also tells someone off camera that they should not be pressurising them for a break, and says that they will go over time if they have to.

Lucman then asks Riaz to give him a “dhamaka”, and is promised that he will get one on the next show.

Bokhari also delivers a message from Maryam Nawaz that a car had been offered to them but they had declined it after saying thank you.

During this talk, a muffled off screen voice says something and Riaz tells the female to stay quiet.

The second part also sees both anchors getting into a little tiff over camera time. Bokhari calls Lucman childish, who takes his mic off and leaves.

Riaz appears desperate when Lucman walks off, asking him to come back, saying it will be unfair for him.

An angry Lucman returns and tells Riaz that he will say live on air that he was pressurised into doing the show by him and Mian Amir.

Riaz continues trying to reconcile between the two during all of this.

He then begs both anchors and says that the program will be spoilt and that his life is at stake. Lucman then tells Riaz that he will say that he had gone to meet the man who also had documents to show against Dr Arsalan Iftikhar.

A video close to 26 minutes will now just add to the only dangerously brewing storm that has a member of the judiciary linked to it.