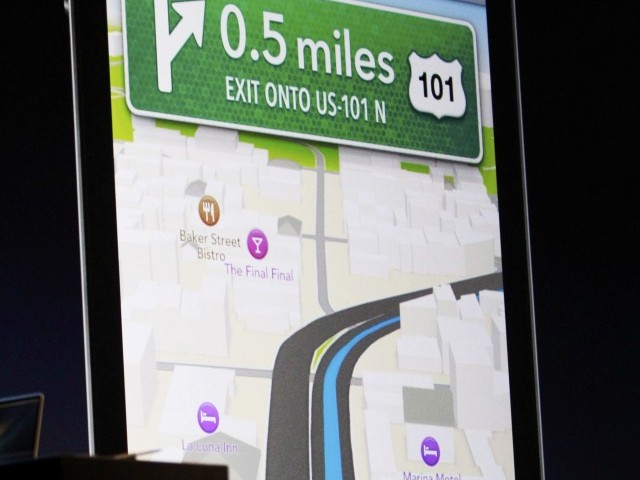 SAN FRANCISCO: Apple said Monday it was making its own maps for iPhones and iPads as it revved up its mobile gadget operating system in a drive to outdistance rivals powered by Google’s Android software.

As anticipated, Apple booted Google Maps from the next-generation operating software for iPhones and iPads, opening up a new front in the war with the maker of the Android operating system.

Apple’s new iOS 6 operating system for the iPhone and iPad includes “an entire new mapping solution from the ground up, and it is beautiful,” Apple’s Scott Forstall told the standing-room only crowd in San Francisco.

“We are doing all the cartography ourselves. We are covering the world.”

Apple has “ingested hundreds of millions of business listings around the world,” he added, and has integrated with the consumer review service Yelp for reviews and ratings.

The Apple maps program will includes real-time traffic, updated with help from users “to keep traffic info fresh and up to date,” he added,

The move means Apple will no longer rely on the Google program for its main maps application.

Apple has been in an intense legal battle with makers of Android devices, contending the open-source software infringes on patents from the iPhone and its operating system.

Although maps does little to generate revenues directly, it often links to searches for products and services such as restaurants or businesses.

Analysts say the Apple maps program could over time move iPhone and iPad users away from Google search and reduce revenues for the search giant.

“Make no mistake, with maps and some expanded Siri features, Apple is now in the search business,” said analyst Greg Sterling on the technology blog Search Engine Land.

Google last week unveiled a revamped maps program that allows users to select an area and save a local map which can be viewed when a user does not have a data connection.

Apple said its iOS 6 will be in devices shipped in the coming months that will also include a better-educated Siri personal assistant, which performs many of the search functions of Google.

“Siri has been out only eight months,” Forstall said.

“In these eight months Siri has been studying up and learning a lot more.”

Siri, which made its debut with the release of the iPhone 4S, will be extended to recent generation iPad tablet computers, according to Forstall.

Another improvement to the iOS will be to incorporate Facebook within the operating system of Apple devices.

“We have been working very closely with Facebook to create the best Facebook experience ever on a mobile device, we are integrating it right into iOS 6,” Forstall said.

The move keeps Apple, which has been dominating the market for tablet computers like the iPad, in the game against a new line of slimmer laptops using Microsoft Windows or the Google Chrome operating system.

The MacBook Air is facing new competition from Windows-powered laptops which have slimmed down for extra portability but Apple boasted about the superiority of the MacBook.

“Everyone is trying to copy it, they find it’s not so easy,” Schiller said, adding that the new models will see a boost in speed and memory and cost $100 less than previous versions.

The high-performance MacBook Pro will include the so-called retina display used on the new iPads, giving an extra high resolution screen.

“With a gorgeous Retina display, all flash architecture and a radically thin and light design, the new MacBook Pro is the most advanced Mac we have ever built,” Cook said.