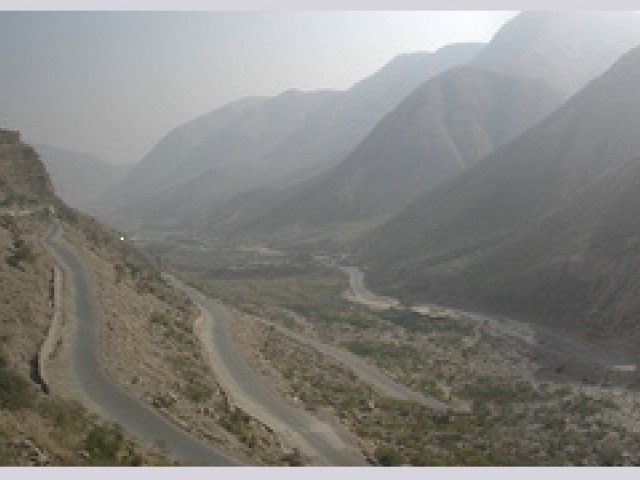 Fort Munro is the only hill station in southern Punjab in the Sulaiman Mountains Range. Its altitude is 1800 meters and attracts many people for short stays during the summer. PHOTO: tdcp.gop.pk

The three personnel had escaped a day earlier from the Fort Munro police station following an attack by hundreds of sympathisers from their tribe. Two other officials accused of involvement in the assault case are still at large. Shahnawaz told reporters in Dera Ghazi Khan that the three men were taken into custody after a jirga meeting was held to decide the matter.

Earlier, BMP Commandant Tariq Basra told The Express Tribune that tribal leaders had assured that they would hand over the three men within the next 24 hours.

The jirga — attended by more than 50 tribal elders from the area — proclaimed the innocence of the accused men.

The rape victims told an investigation on Sunday that they could identify all five personnel accused of the crime, including the two men who have escaped. They also revealed that the BMP officials had filmed the gang rape and had threatened to make the footage public if the girls dared to disclose the sequence of events.

Amjad Ali, one of the accused on the run, told The Express Tribune from an undisclosed location that all five women were “call girls,” who were accompanied by their procurer. He said they had been called from Lahore and had misbehaved with the personnel when they were stopped at the checkpost, and threatened them. Ali added that the medical reports would reveal that they had in fact not been raped.

DCO Iftikhar Ali Saho told The Express Tribune that negotiations with tribal leaders were successful and they had demanded an inquiry on merit about the incident. He said that the victims have been moved to Dera Ghazi Khan Circuit House in strict security to ensure their safety.

The DCO said, however, that details about the victims remain vague. He said that the victims were not revealing their real identities and that the statements provided by them were contradictory. He appealed through the media for their relatives to contact the administration and make the investigation transparent.

The inquiry team, ordered by the Punjab chief minister, arrived in Dera Ghazi Khan on Sunday. The team includes the Additional IG of the Punjab Police Nasir Durrani, Punjab Home Secretary Shahid Khan. They have been given a briefing by intelligence officials, the district administration, and BMP officials. A report will be submitted today (Monday) to the chief minister.

“I have summoned the BMP commandant, DCO and DPO DG Khan on June 21,” said panel head Riaz Fatyana. “We condemned and took serious notice of the news of the gang-rape of female tourists in Fort Munro,” Fatyana told The Express Tribune.

The committee has sought a detailed report on the incident. It has also directed Basra to submit three-year criminal records of the BMP, if any. The panel has also ordered the commandant to ensure the safety of tourists in the area, to arrest those involved in the incident within three days and to present them before the committee on June 21.

President Asif Ali Zardari has also directed the authorities concerned to submit a detailed report on the incident, saying strict action would be taken against those involved. He also directed them to ensure the safety of the victims.

WITH ADDITIONAL INPUT FROM ZAHID GISHKORI IN ISLAMABAD