Condem­n federa­l, provin­cial govts and distri­ct admin for keepin­g mum over the crisis.
By Our Correspondent
Published: June 10, 2012
Tweet Email 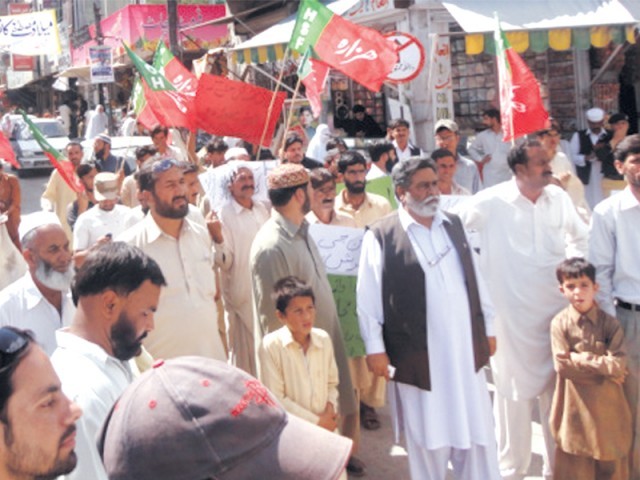 ABBOTABAD: Activists of Hazara Qaumi Mahaz (HQM) have warned of violent protests if the supply of Compressed Natural Gas (CNG) is not resumed by Sunday evening.

In a symbolic sit-in at the Thana Chowk on Saturday, the HQM activists said that the CNG station owners’ shutter down strike to force the government to withdraw the proposed increase in CNG prices has hampered life and business activity across the city. Holding placards and chanting slogans against the CNG station owners and the provincial and federal government, the protesters marched on different roads across the city and vowed to launch widespread protests from Monday if CNG supply was not resumed.

“If any CNG station was to be burnt during the protest movement, the blame will be on the district administration, and the federal and provincial governments,” added a speaker.

The HQM activists asked the Chief Justice of Pakistan to take suo motu notice of the CNG owners’ and the ministry of petroleum’s for exposing people to hardships.

Advocate Qazi Muhammad Azhar, Babu Bashir, Haji Khurshid Hazarvi, Raja Izat Ali and Sajjad Abbasi were among those who spoke to the protesters. They later staged a symbolic sit in at the Thana Chowk for a few minutes.