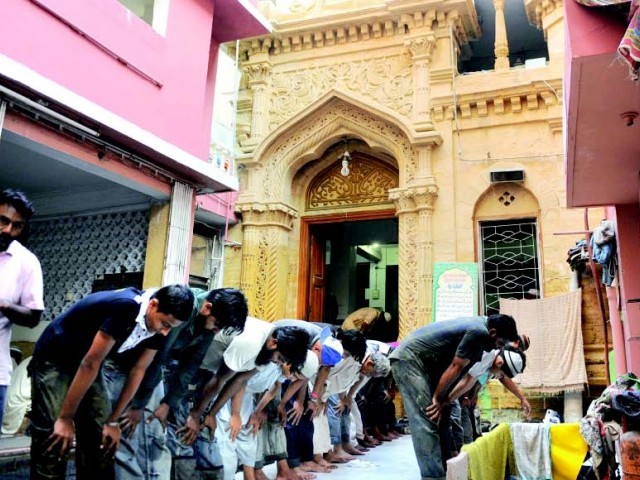 KARACHI: As Muslims cherish the arrival of the holy month of Ramazan, taravih prayers have been arranged in the usual festive manner at mosques throughout the city — many of them an essential part of the metropolitan’s rich heritage, keeping the tradition alive since 250 years.

Worshippers throng these mosques at nights during the month of fasting, amid lights and celebrations that have been a hallmark of Karachi lifestyle, particularly its old areas, since decades.

Jamia Mosque Beech Wali in the Gizdarabad area of Ranchore Line was established 250 years ago. Jamia Mosque Badami, also located in the same area, was built in 1875. The 133-year-old mosque is considered to be one of the finest pieces of architecture built at the time and its administrative issues are handled by a community called the Muslim Marwari Salawat.

Bangi Mosque, also located in Gizdarabad, was built around 100 years back. The same area boasts the presence of Jamia Mosque Pakistan, which was constructed in 1940 to mark the passing of the Pakistan Resolution. Another beautiful landmark of the city, Kachi Memon Mosque on M A Jinnah Road near Light House in Gari Khata, was built back in 1850.

The 150-year-old Jamia Mosque Turk in Juna Market also holds historical significance, while Jamia Mosque Khajoori in the same area is 80 years old. It was initially built with stones, and modified over time.

The Central Jamia Mosque Eidgah was built in 1946 on MA Jinnah Road. The foundation stone of Jamia Mosque Aram Bagh, a famous mosque of the city, was laid on June 20, 1952 by the then information and broadcasting minister Sardar Abdur Rab Nishtar.

The foundation stone of New Memon Mosque at Boulton Market – considered the central mosque of the city – was laid on August, 24 1949 by governor general Khawaja Nazimuddin.

The late Allama Shah Ahmed Noorani, founder of the Jamiat Ulema Pakistan and former president of the Muttahida Majlis-e-Amal, led Taravih prayers at Jinnah Mosque on Burns Road for 40 years.

New Memon Mosque in Boulton Market has the capacity to house more than 10,000 worshippers at the same time. The mosque spans over 17,280 sq yards and its minarets are 19 feet long.

Everything is allowed, sir!