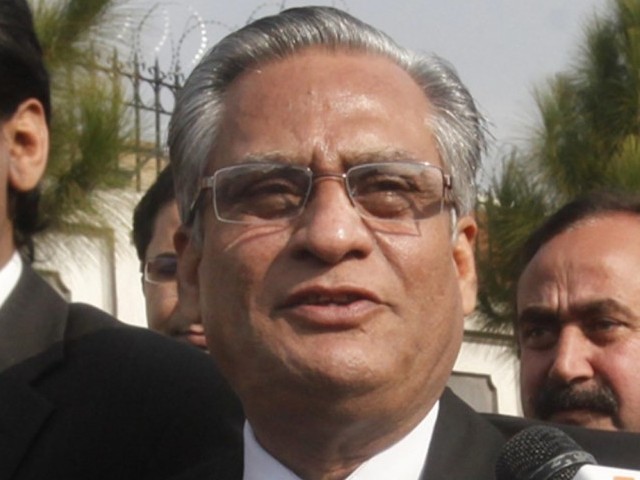 ISLAMABAD: The high-profile case involving the chief justice’s son and a real estate tycoon has put the country’s top judge in the crosshairs, and he may have to step aside, at least on some cases.

Bahria Town’s former chairman Malik Riaz is to file a request to the chief justice to not sit on any bench or hear a case related to Bahria Town, and transfer all such cases to other benches, Riaz’s counsel, Zahid Bokhari, said on Friday.

Cases involving Riaz, his son Ali Riaz, and Bahria Town are pending in different courts across the country, including the Supreme Court. Bokhari will also move an application on Saturday seeking the formation of a larger bench to hear the case.

“We are going to apply for a larger bench … we will even welcome a full court to hear this case,” Bokhari said.

The counsel also claimed that he would present evidence against the accused Dr Arsalan Iftikhar when the case will be taken up for regular hearing.

Later, at the premises of the Lahore High Court, Bokhari said that interviews published in two newspapers on Friday, and attributed to his client, were fabricated. He added that his client will return to the country and appear before the apex court as soon as his doctors would allow him to travel.

How the case unfolded

Earlier in the week, information was leaked to certain media houses claiming that the chief justice’s son,  Dr Arsalan Iftikhar, received millions of rupees and foreign trips as bribe from Malik Riaz in return for pledges to settle all pending cases related to Bahria Town.

As the news spread on national media, Chief Justice Iftikhar Muhammad Chaudhry took a suo motu notice, and summoned his son and Malik Riaz to the apex court.

After preliminary hearing on Thursday, he detached himself from the bench and the remaining two members continued the hearings. After the chief justice’s departure from the bench, the court barred Malik Riaz from making any statements in the media. Bokhari had promised the court that his client would follow their directions.

That promise, however, seemed tenuous after an interview of Malik Riaz with Ansar Abbasi was published in Daily Jang and The News on Friday.

In this interview, Malik Riaz exonerated the chief justice, but leveled more serious allegations against Dr Arsalan, alleging that he had been blackmailing him.

Bokhari, however, denied Malik Riaz gave any statement to any media person after the court order.

“Malik Riaz told me on telephone that a wrong interview was attributed to him by the journalist,” Bokhari said. He added that the court did not bar his client from speaking to the media.

“It was not an order, but a desire that the court had expressed,” he said.

Abbasi, while speaking with The Express Tribune, said he had received a phone call from Malik Riaz on Thursday at 5:02 pm

In the call that lasted more than eight minutes, Malik Riaz allowed him to publish the details of his earlier meetings with him, Abbasi said.

Abbasi also showed his phone call record to this scribe to prove his claim.

When The Express Tribune contacted the same cell phone number, a person claiming to be Malik Riaz’s secretary said his boss was busy and would return the call. No call was returned till the filing of this report.

(With additional reporting by Rana Tanveer in Lahore)