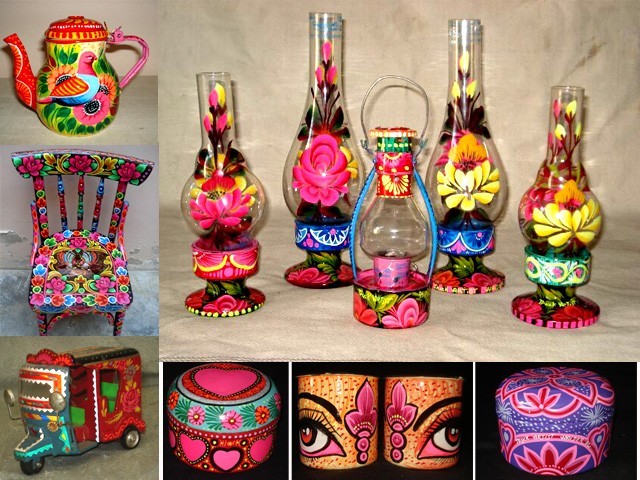 Despite a recent surge in popularity through fashion shows, truck art still struggles to carve a niche for itself. PHOTOS: PUBLICITY

While truck art has become a hot design commodity gracing fashion runways and receiving international acclaim, there are only five shops stocking most of the truck art wares in the handicraft bazaar inside Zainab Market’s eclectic lanes.

These stores mostly sell painted trucks and rickshaws while the more interesting products like kettles, lanterns, plates, bowls and furniture items are displayed at The Second Floor, select stores in malls or at exhibitions.

Although truck art became a regular feature on catwalks ever since designer Maheen Khan began propagating it as a design element with her brand Gulabo, the recent proliferation of truck art products can be attributed to the Haider Ali,an artist who has been travelling abroad and delivering lectures at foreign universities to promote this niche art. It comes off as no surprise then that the principal supplier of truck art products are SS Arts, run by Ali’s student and distant relative, Fayyaz Ahmed.

Situated just off Zainab Market, Ahmed’s modest but vivaciously painted office in Saddar is where he takes orders to supply not only to the mass market but also to large companies like AlKaram, Ary, Indus that order pieces for special events.

Ahmed Ali, who has been running his store Meraj Handicrafts at Zainab Market for the last 15 years, says, “While truck art was always on display with other handicrafts, now there’s greater awareness of the art and it’s become more popular since the trucks and rickshaws have become more colourfully painted.” Abdul Hameed of Super Handicraft, which is located right next to Ali’s store, seconds this opinion. “Initially these rickshaws were made with wood but now those have been replaced by the ones with mirror work that costs around Rs150 per piece,” says Hameed.

Since mirror work is less labour-intensive than constructing rickshaws from tin, which requires significant effort of welding, joining and then intricately painting onto their small tin bodies, tin rickshaws are more costly and are typically sold around Rs400 per piece.

However, despite the surge in popularity of the art, Fayyaz admits that business isn’t bustling all that much. “The response in the local market isn’t great,” he points out. “But during Christmas and Eid times, business is very good as expatriates take products as souvenirs for friends abroad.”

The shopkeepers at the stores in Zainab Market also admit that most of the sales of truck art are from the foreigners who visit the country and want to take these little pieces of art as presents.

So if foreigners have developed a liking and appreciation for the art, why is it that it’s struggling to survive in Pakistan? Mohammad Hussain, who has been in the business for 10 years, makes an interesting point. “Items like these (truck art) don’t sell every day.” Perhaps, that is why truck art doesn’t have its own dedicated market as do other crafts like marble and wooden wares do in Saddar.

Fayyaz, however, cites labour shortage rather than market demand as a fundamental reason for this. “Haider tried to create a union to start a market. But he couldn’t find the labour equipped with the right skill set to do so since most truck artists prefer painting trucks instead of making these smaller gift items.”

He explains that an entire truck can be painted the same day generating around Rs1 million of revenue per truck compared to the measly amount that painting a small kettle, for instance, would generate. For many workers, it is frustrating to work on smaller items like kettles, jewellery boxes and rickshaws when they could work on the wide canvas of a truck that more people will see and appreciate.

However, despite the reluctance of the labour involved, there seems to be a glimmer of hope in the market demand as Ali, of Meraj Handicrafts, says, “There are no unsellable items in handicrafts; 50 to 70 colourful rickshaws are sold easily per month.”

TV shows: Dishing it out