Expert­s believ­e a way needs to be found to tip the scales in favour of rebell­ion seekin­g to topple Bashar al-Assad.
By AFP
Published: June 7, 2012
Tweet Email 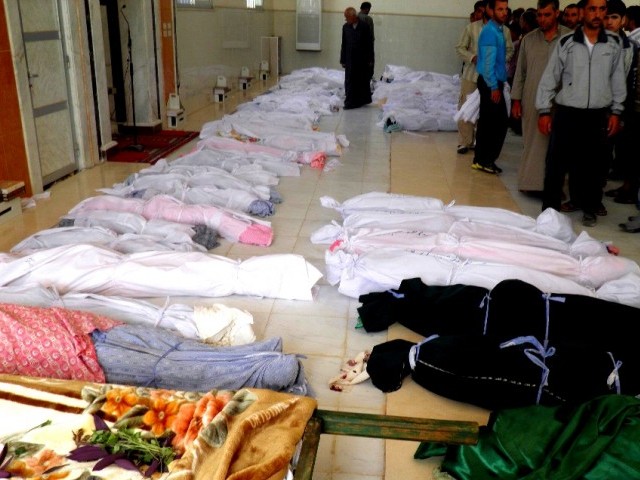 Experts believe a way needs to be found to tip the scales in favour of the rebellion seeking to topple Bashar al-Assad. PHOTO: AFP

WASHINGTON: With the Annan peace plan at stalemate, a badly fragmented opposition and fierce resistance from the regime, Syria risks descending into a long and bloody civil war, analysts say.

As international powers grapple for a solution to end the conflict, experts believe a way needs to be found to tip the scales in favour of the 15-month rebellion seeking to topple Syrian President Bashar al-Assad.

“The regime is doing its absolute best right now to create a climate of civil war. That is clear,” Salman Shaikh, director of the Brookings Doha Center, told AFP.

“The longer the situation goes on, I believe, Syria will be facing more of a sectarian problem than it has,” he said. “I think you’re going to find there’ll be increasingly bloody episodes because the diplomacy has not managed to keep up with the situation on the ground.”

US Secretary of State Hillary Clinton met late Wednesday in Istanbul with senior officials from 15 other countries to discuss how to halt the violence in Syria and remove Assad from power.

The talks which came as the six-point peace plan drawn up by UN-Arab League envoy Kofi Annan appear to be unraveling. One of its main resolutions is a ceasefire yet the tragedies have continued such as the massacre in Houla last month in which 108 civilians, many of them women and children were killed.

“We are kidding ourselves if we act as if this peace plan is bringing peace… It is kind of like Tinker Bell if we all say that we believe in it, then it will happen,” Elliott Abrams, senior fellow for Middle Eastern studies at the Council on Foreign Relations, told AFP.

Residents in Houla blamed the massacre on residents from the neighboring Alawite villages, the same mystical Islamic sect as the Assad family who have ruled the Sunni majority nation with an iron fist for over four decades.

Fears are also growing the conflict in which rights groups say some 13,500 Syrians have already died. Its increasingly turning into a proxy war between the West and its Arab allies on one side, and Russia, China and Iran on the other.

“There’s been a privatisation” of the conflict, said Shaikh, “meaning, different groups from the outside have been supporting different groups on the inside… And this is the great danger now.”

Even though Washington has been clear that so far it is only providing non-lethal support to rebel groups, such as communications equipment, there are growing calls for a greater US involvement.

Some Republicans have called for the United States to arm the rebels, but there is little appetite to enter another Middle Eastern conflict in the wake of Iraq and Afghanistan.

“There is a leadership vacuum,” said Abrams, who has argued that greater US involvement in Syria is in national strategic interests as a collapse of the Assad regime would by extension prove a blow to Iran.

Putting together some kind of coalition air support would also help support the rebels, while keeping US boots off the ground, Rubin said.

Part of the difficulty facing Washington and the international community is the fragmented nature of the opposition, with the Free Syrian Army fighting on the ground and the Syrian National Council trying to fill the political void.

As the conflict drags on, militias have sprung up in towns and cities, with one expert saying there could be 50 or 60 different groups.

He added that Assad could not be part of the talks, but “the exact makeup, who talks to who, obviously that’s something that needs to be clarified by the Syrian people themselves.”

“Washington needs interlocutors,” Joshua Landis, director for the Center for Middle East Studies at the University of Oklahoma, told AFP, arguing that the United States did not want to be caught out supporting the wrong group.

Washington was already “off-shoring” the conflict to regional allies such as Saudi Arabia who were funneling arms to the rebels, he said, “so at least when the car bomb goes off in Damascus, it won’t have ‘Made in America on it.’

“Everybody in Washington wants regime change on the cheap. They want to bomb without spending any money and without putting any American boots on the ground, they want another Libya. The trouble is, Syria is not Libya.”

One possible way forward, backed by Russia, is a plan based on the model in Yemen, in which Assad’s inner circle would help lead a transition.

But that requires a cohesive opposition prepared to engage “in what is in effect a negotiation with the government,” said Shaikh. “That becomes even more difficult with the situation on the ground becoming ever more violent.”

China says to offer $10b in loans to SCO member states