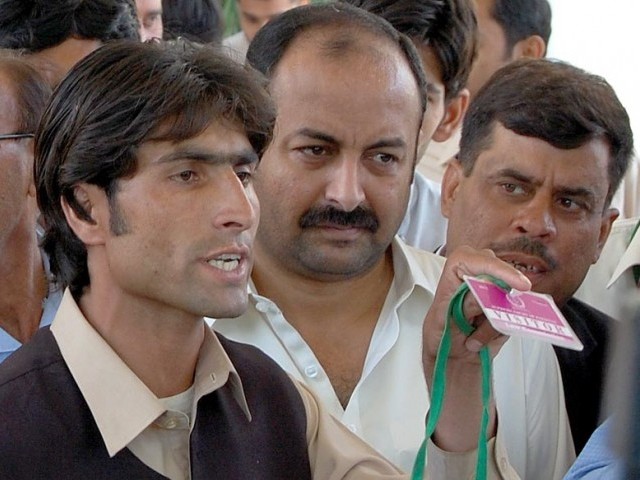 Contradictory versions flooded the Supreme Court on Wednesday during the hearing of a case where a death decree was issued against five women in Kohistan.

Khyber-Pakhtunkhwa Chief Secretary Ghulam Dastagir informed the apex court that helicopters had been dispatched to fetch the five women to court and asked for them to wait till 6pm. Adviser to the Prime Minister on Interior Affairs Rehman Malik told the court earlier in the day that the interior ministry was ready to extend any kind of support required, whether it was helicopters, Frontier Corps (FC) men or army personnel.

At 6 pm, neither the helicopters nor the girls showed up. After this, the bench, headed by Chief Justice Iftikhar Muhammad Chaudhry, adjourned the hearing for a second time in the day, and extended the deadline to present the four girls before court by 1pm today (Thursday).

The court also directed the government functionaries to produce the jirga participants.

According to reports, the five girls, along with two other men, were declared ‘ghul’ (fornicators) after they were allegedly caught on video singing and dancing together at a wedding party.

During the hearing, officials from Kohistan district’s administration had appeared before the court, including the Hazara deputy inspector general of police, and Hazara Commissioner Khalid Umarzai. They informed the court they had failed to contact the girls despite several attempts – but they insisted the girls were alive.

They officials clarified that the culture of Kohistan does not allow men to contact girls freely. The court told the officials that if the girls were alive then they should take someone who could access them in order to record their statement.

While the chief justice was issuing these orders, the two men accused of filming the video and uploading it on the internet – Bin Yasir and Gul Nazar –were brought before the court by the police. Nazar told the court that the girls had been killed. Attorney General Irfan Qadir informed the court that the families of the girls were not willing to send them. He added that so far, all the people who have been investigated regarding the video said that the video is doctored.

Girls ‘slaughtered’ on May 30

Speaking to the media on the premises of the Supreme Court, Muhammad Afzal, the brother of Yasir and Nazar said that the girls were “slaughtered” on the eve of May 30.

Afzal said that if required, he was ready to swear on the Holy Quran “a thousand times over.” He further revealed that he and his brothers were facing threats to their lives and alleged that the Hazara DIG and commissioner were planning on “killing them”.“The only relation that I and my brothers have with this whole incident is that my brothers filmed the celebrations of our uncle’s wedding,” he said.

Afzal said that only the men danced, while the girls clapped. He added that the fatwa against them and the girls was given a month back by Maulana Javed in Mansehra. “After giving out the fatwa, they sent out 40-50 men to hunt us down in different areas including Battagram, Abbottabad and Mansehra.” The girls belonged to the same family, he said, “Three out of them were cousins, while two of them were closely related.” He had identified them as Bazgha, Shaheen, Amina and Begum. He could not recall the name of the fifth girl. Afzal further revealed that he knew four men who had seen the girls getting slaughtered.