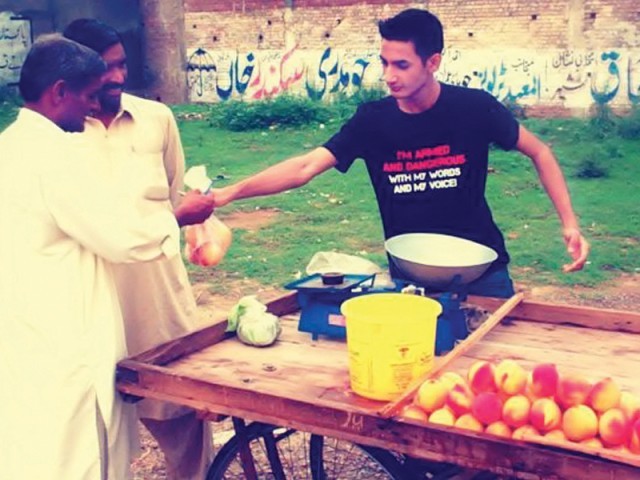 Always mindful of the plight of others, 17-year-old Ghalib Khalil decided to wade right through to the ones who needed to be rescued during the 2010 floods and has won international recognition for it.

Always mindful of the plight of others, 17-year-old Ghalib Khalil decided to wade right through to the ones who needed to be rescued during the 2010 floods and has won international recognition for it.

Seventeen-year-old Ghalib Khalil’s parents always knew that their son was a bit of a philanthropist. “Every time we saw a beggar on the street, he would force us to give something,” says his mother, recalling Ghalib’s childhood. “He was always curious about why people were weak, sick and poor.”

It didn’t then come as a surprise to them that when the 2010 floods devastating Pakistan, Ghalib was filled with the desire to help those thousands of people whose lives and livelihoods had been swept away by the surging waters.

Not one to simply switch the channel and move on, Ghalib instead decided to roll up his sleeves and pitch in with the relief efforts. Thus, with the help of school friends and one of his teachers, the Rescue Pakistan Youth Foundation was born and the real work of collecting funds for the flood victims began.

But good intentions are rarely enough in this world, and despite his enthusiasm, Ghalib wasn’t too optimistic about receiving enough donations to make a difference. “I had thought that only Rs25,000 would be collected in the first flood drive, but two days later when I checked my bank account, it showed a balance of Rs200,000,” said Ghalib in an interview with the BBC. “I was amazed at our people’s generosity.” It was an impressive beginning, but the best was yet to come: by the end of the campaign, which included a fundraising festival in Lahore that he had organised himself, he had collected 10 million rupees under the aegis of his newly formed NGO.

For those who know him, the idea that this relatively unknown teenager could raise so much money wasn’t at all unbelievable. With a reputation of being trustworthy and responsible, it wasn’t difficult for him to gain the trust of donors.

“In school, he was nicknamed ‘little angel’ because he was always lecturing us on helping people and being kind,” says Ghalib’s close friend Haider Jamil.

The next step was to ensure that the money reached those it was meant for. “We made several attempts to contact the government and coordinate with their relief efforts, but received no response, Ghalib said in the BBC interview. Without any official support, Ghalib decided that the only way to complete this Herculean task was to simply do it himself. He then screened every single person who applied to volunteer for the foundation, selecting 40 young girls and boys. While he himself monitored every rupee that was donated, the volunteers he’d selected went to flood-hit areas to disburse the amount. “We owe a debt of gratitude to everyone who helped us,” said Ghalib.

While he may not be a household name in Pakistan, he has certainly won accolades in the wider world. The Huffington Post, in partnership with youth service America included him in their list of 25 most powerful and influential young people in the world list for his relief work during the floods. The list was aimed at promoting teenagers and young adults who were having a positive effect on their community — and if anyone fit that bill, it was Ghalib!

But even as the relief activities for the 2010 floods wound down, another disaster soon attracted his attention. In April 2011 the Fukushima earthquake and resulting tsunami devastated Japan and Ghalib once again could not sit by idly and watch.

“The lives of millions of happy people were uprooted and homes were levelled to the ground,” he recalled. “So we geared up to help the Japanese people and managed to raise a million rupees. Gina, a Japanese friend, assisted us in distributing funds in her country.”

For Ghalib, humanity truly transcends borders — even hostile ones — and his best friend is an Indian girl named Arveen.

“I was surfing through my Facebook fan page when I saw a message in my inbox which was sent by a girl named Arveen Singh. In the message, she asked me to promote her page on my fan page. When I went to view her profile, I found out that she was from India. This immediately sparked my curiosity, and I sent her a friend request, which she accepted,” Ghalib writes in a blog for The Express Tribune.

From that simple step, they have developed a friendship deeper than their countries’ conflicts and gone on to become youth Peace Champions from India and Pakistan through Facebook’s Friends Without Borders project.

“The description on the project’s page intrigued me and I immediately joined. They soon launched a campaign in which they were selecting peace champions from eight countries,” Ghalib writes. The countries included Pakistan and India and Ghalib realised that he and Arveen fit the bill perfectly.

Excited, they brought out their cameras — Ghalib in Sialkot and Arveen in New Delhi — and made a short film showing that their friendship has survived cultural differences, customs and problematic ties between their countries. The video was selected by Unicef to be screened at the World Youth Conference in Mexico in August 2011.

“Peace is possible, but not by the help of government or nations. It is actually possible when we make our own selves peaceful. Only then can we maintain peaceful relationships in the world,” says Ghalib in the video.

Through his work, Ghalib has put that philosophy into action. He may not have a future plan of action sorted out already, but he knows what his calling is. “My message to young Pakistanis, and people from around the world, is that they should let go of their differences to rescue the downtrodden and secure the oppressed.”