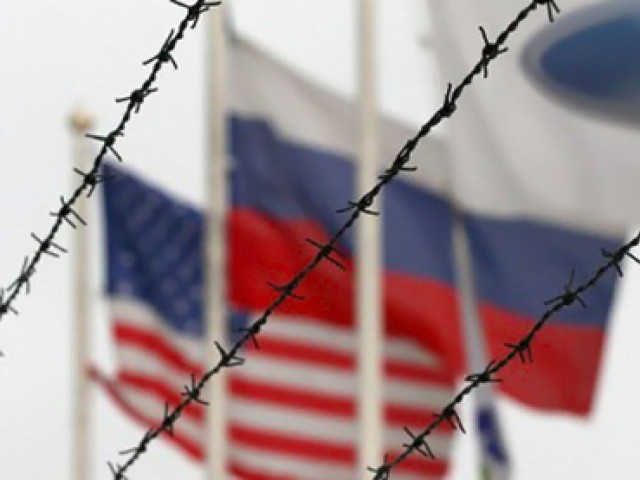 WASHINGTON: A bill to punish Russian officials for alleged human rights abuses would badly damage US-Russian ties and hurt US exports, business groups said on Tuesday, two days before a key congressional panel will vote on the measure.

The bill would require the United States to deny visas and freeze the assets of Russians linked to the detention and death of Sergei Magnitsky, an anti-graft lawyer who died in a Russian jail in 2009 under suspicious circumstances.

The legislation is expected to win approval on Thursday in the House of Representatives Foreign Relations Committee, clearing the way for the full House to take up the measure, either on its own or part of a trade bill.

Bill Reinsch, president of the National Foreign Trade Council, whose members include major US exporters such as Boeing, Microsoft and Caterpillar, told reporters on Tuesday the Magnitsky bill was “seriously flawed.”

He argued it would make it even harder to get Russia’s cooperation on issues ranging from Iran’s nuclear ambitions to Syria’s bloody crackdown on dissent.

US companies also fear they will lose sales coming from Russia’s entry into the WTO because Moscow will retaliate by turning to other suppliers, Reinsch said.

The issue is coming to head because the White House wants Congress to establish “permanent normal trade relations” (PNTR) with Russia by removing the former Soviet republic from a Cold War-era human rights law known as the Jackson-Vanik amendment.

That measure tied bilateral trade relations to the right of Russia Jews to emigrate freely, which the White House says, is no longer needed and inconsistent with the rules of the World Trade Organization, which Russia is expected to join in coming months.

While the House panel is acting first on the measure, the legislation was largely crafted by Senator Ben Cardin, a Maryland Democrat, in response to Magnitsky’s death.

“Our preference is for Congress to lift Jackson-Vanik in a clean trade bill, but we understand the intent of Senator Cardin’s bill regarding Sergei Magnitsky and share the same goals of promoting respect for human rights in Russia, and specifically seeking accountability for those implicated in the wrongful death of Mr Magnitsky,” Caitlin Hayden, a spokeswoman for the White House National Security Council said.

“We continue to consult with Senator Cardin and other Members of Congress on how to most effectively address this case,” Hayden said, noting the administration has already used existing authorities “to ensure that no one implicated in Mr. Magnitsky’s death can travel to the United States.”

Many members of Congress don’t want to drop Russia from the older human rights law without replacing it with new human rights legislation. Meanwhile, Russian officials have made clear the Magnitsky bill is unacceptable.

USA Engage, a broader business coalition of 670 member companies and trade associations, also warned against the bill, which they fear could move through Congress on a faster track than the legislation to establish PNTR.

However, Senate Foreign Relations Committee Chairman John Kerry did not follow through on an earlier plan for action on the legislation in May and still has not scheduled a vote in his committee. Both the full House and the full Senate would have to approve the measure for it to become law.

“The history of these things is once they get to the floor, they pass overwhelmingly,” so business groups are hoping to modify the legislation to make it less objectionable to Moscow before it reaches that point, Reinsch said.

One alternative might be for lawmakers to drop the asset freeze and focus simply on the visa ban, said Cory Welt, associate director of the Institute for European, Russian and Eurasian Studies at George Washington University’s Elliott School of International Affairs.

That could be modeled after an executive order issued by President Barack Obama in August 2011, which spelled out the administration’s intention to deny visas for individuals guilty of human rights violations, Welt said.

The United States has already used that authority to impose visa restrictions on some Russian officials believed to be involved in Magnitsky’s death, Welt told reporters at a lunch organized by the business groups.

It would be “unprecedented” for the United States to go further than and impose economic sanctions, in the form of the proposed asset freeze, for an individual crime, Welt said.