Military purse may be twice as large as budgeted

Military purse may be twice as large as budgeted

Milita­ry may be alloca­ted up to Rs913 billio­n, or one-third of federa­l budget.
By Shahbaz Rana
Published: June 6, 2012
Tweet Email 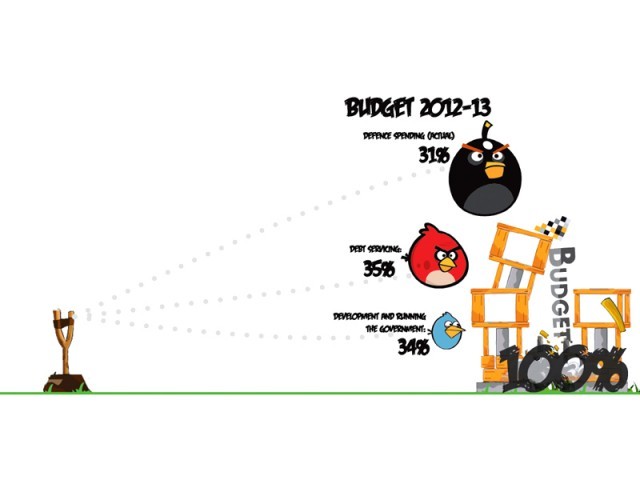 Military may be allocated up to Rs913 billion, or one-third of federal budget. DESIGN: FAIZAN DAWOOD COPYRIGHTS: ROVIO

As opposed to a stated spending of Rs545 billion, or one-sixth of the federal budget, Pakistan may actually be spending around Rs913billion, or 31% of next year’s Rs2.96 trillion budget, on defence.

Besides the overt budget, an additional amount will be provided to the military out of its share in the Coalition Support Fund (CSF), expected to be disbursed by the United States, and services fees from the United Nations on account of military personnel involved in peacekeeping missions.

Besides this, a significant chunk will be provided from the budget to pay pensions to retired military officials and for progressing country’s defense development programme.

When combined with allocations to the country’s interest payments, which amount to Rs1.1 trillion, or 35% of the total budget, only one-third of the budget is left for running the government, and development.

For the next fiscal, the government has budgeted receiving Rs150 billion from the US on account of CSF reimbursements and, according to an arrangement between the military and the civilian leadership, as much as 60% of the CSF reimbursements would be given to the military. By that account, the military will get Rs90 billion next year, provided, of course, that the US reimburses the outstanding amount.

The United Nations, meanwhile, will provide Rs30 billion next year on account of services fee for Pakistani forces taking part in peacekeeping missions under the UN flag.

The government has also allocated Rs98 billion for military pensions, according to the budget documents. For the sake of pensions, the military insists that, after retirement, military officials should be treated as ‘civilians’. When it comes to accountability, though, retired military officials are prosecuted under military laws. Currently, the General Headquarters is not allowing the National Accountability Bureau to independently probe three former military generals who have been named in the Rs1.8 billion National Logistic Cell scam by the Public Accounts Committee (PAC).

Besides that, an additional Rs150 billion will be given to the army for taking forward the country’s defence programme.

Pakistan Tehreek-e-Insaf Chairman Imran Khan recently joined the chorus of voices demanding that the military’s budget be audited, but the Auditor General of Pakistan Akhtar Buland Rana informed the PAC that some of the military sub-departments were resisting the audit.

In the post-budget press conference, Finance Minister Dr Hafeez Shaikh avoided the question regarding the actual defence budget but said that his team “will respond.”

The finance ministry, however, did not respond till the filing of the story.  “Once in an international conference, held in Washington, an American diplomat stressed the need to cut the defence budget,” said Saeed Ahmad Qureshi, a former federal finance secretary. “I responded that our defense budget is not made in Islamabad but in New Delhi; to reduce defense expenses, the Americans should push Indians to reduce their defense budget,” Qureshi said.

He added that, historically, Pakistan’s defence budget is based on a certain proportion of the Indian defence budget, aimed at maintaining a defensive deterrent against any Indian offence.

Qureshi, however, seconded Imran Khan, saying transparency is imperative and people should know what is happening with taxpayers’ money.